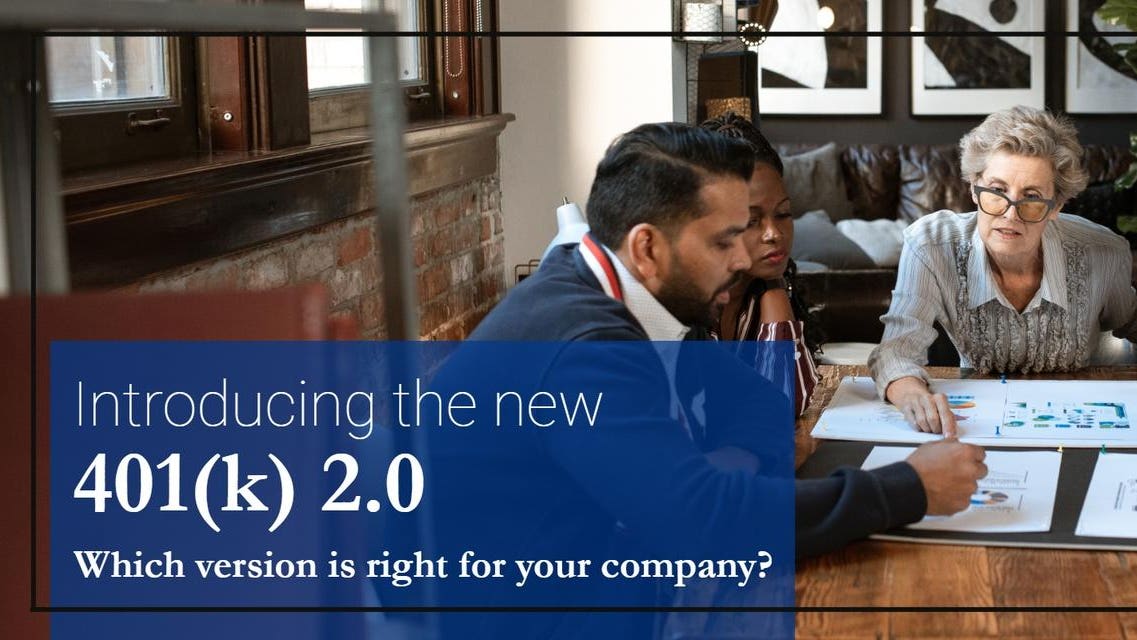 There is some good news to come out of 2020 and 2021 after all, and it’s concerning the 401(k)-retirement investment vehicle. Employers and Employees alike stand to reap significant benefit from new legislation that represents some of the most sweeping changes to the retirement space in decades.

On January 1st, 2021, the Setting Every Community Up for Retirement Enhancement (SECURE) Act came into force. The bi-partisan Act, tabled in 2019, was proposed to make broad changes aimed at increasing the coverage of the existing plan and opening up more opportunities that were previously unavailable to single-employer plans (SEPs). The SECURE Act sailed through both Houses almost unanimously and was signed into law by then-President Trump on 20th December 2019. In other words, 401(k) 2.0 is here, and it promises a whole lot of interesting changes.

One of the biggest weaknesses of the original 401(k) is that it remains largely inaccessible to the people who need it most. Based on data from the US Census Bureau, it is reported that only 32% of Americans are actively contributing to a 401(k) retirement plan. The new “401(k) 2.0” plan seeks to change this in three ways.

First, the new act requires auto-enrollment for all small businesses with NEW 401(k) and 403(b) plans, with the option for employees to opt out at will. The act will also make long-term part-time workers, contractors, and temporary workers eligible after 2 years instead of three, with the option to participate sooner. These measures are especially important to the 41% of millennials who lack access to an employer-sponsored plan. Even with access, the research goes on to suggest that slightly over half of millennials with access to such plans are making contributions. Thus, the third step is to avail incentives for businesses and employees alike to participate. Businesses will receive attractive tax breaks for auto-enrollment and will even be allowed to offer small incentives like gift cards. Employees will receive several benefits to encourage enrollment, including tax credits for low-income workers, employer contributions to those with student loans, and the ability for those over 60 to make higher catch-up contributions.

The most important provision made by the new SECURE Act is that multiple unrelated employers are now permitted to pool in open Multiple Employer Plans or MEPs. Previously, legislation allowed only those employers with a commonality of interest, such as business associations, to pool their 401(k) plans for administrative and investment reasons.

This change will be a huge gain for small businesses that previously had little power to administer 401(k) plans for their employees. Under the new mandate, small businesses can now implement attractive 401(k) plans in partnership with other organizations and take advantage of economies of scale to minimize costs. Previously, such employers were restricted to Single-Employer Plans (SEPs). While SEP plans afford more control, flexibility, and significant tax credits in plan start-up costs, they are expensive to run and put significant fiduciary responsibility on the employer.

Alternatives to SEPs allow multiple employers to come together in Multiple Employer Plans or MEPs. However, MEPs are highly restrictive, inflexible, and take away substantial control from the hands of participating employers. There have been alternatives to MEPs, such as Group-Negotiated Contracts and open MEPs, but these have their disadvantages as well. Regulations such as the “Bad Apple Rule” and circuitous exit processes made MEPs unattractive for all but the biggest employers. PEP plans were formulated to allow such pooled plans to have more administrative responsibility and flexibility while operating under a single Pooled Plan Provider (PPP).

The New PEP Plans Are a Ray Of Light

The Pooled Employer Plans (PEPs) are a gamechanger for MEP 401(k) plans. They operate just like MEPs, although without the need for separate Form 5500s and audit requirements. The IRS and DOL are still working to flesh out the basic structure of PEP plans, but we can already see significant advantages in these new 401(k) vehicles.

By pooling their assets together, PEPs will have the power to hire specialist talent to take care of plan administration and provide essential training to participants. This would have been too expensive for SEPs before the Act. For MEPs, the Bad Apple Rule states that if one employer in the plan does not meet plan requirements, the whole plan is disqualified on the basis of being noncompliant. However, PEPs now have instructions on how to deal with errant employers without affecting the compliance status of the whole plan.

Implementing the New SECURE Act as an Employer

Even though 401(k) 2.0 is already in force, implementation is still in its infancy. Many of the changes proposed should already be in motion since 2020, but there is little for employers to do until the DOL and IRS flesh out the details of the new Act. In the meantime, the SHRM released a digest of what employers need to start doing, including letting part-time workers into the plan, taking automatic enrollment and associated tax credits, and incentivizing employees to start participating.

At the end of the day, your best course of action as an employer is to work with an expert to help you on implementing the new 401(k) 2.0 regulations. The new changes promise numerous benefits for employers and employees alike, but it will take time before it reaches full maturity.

Brian Menickella is a co-founder and managing partner of The Beacon Group of Companies, a broad-based financial services firm based in King of Prussia, PA.

This information is not intended as authoritative guidance or tax or legal advice.

How to return to work — and keep getting the $300 unemployment benefit
Dr. Anthony Fauci’s advice to Vanderbilt grads: Never stop learning and ‘cultivate joy,’ not just professional accomplishments
Seven Steps To Running Your Real Estate Business On Auto-Pilot
Where Are The Personal Advice Apps For People Who Really Need Them?
Here’s how the pandemic changed charitable giving by wealthy households in 2020