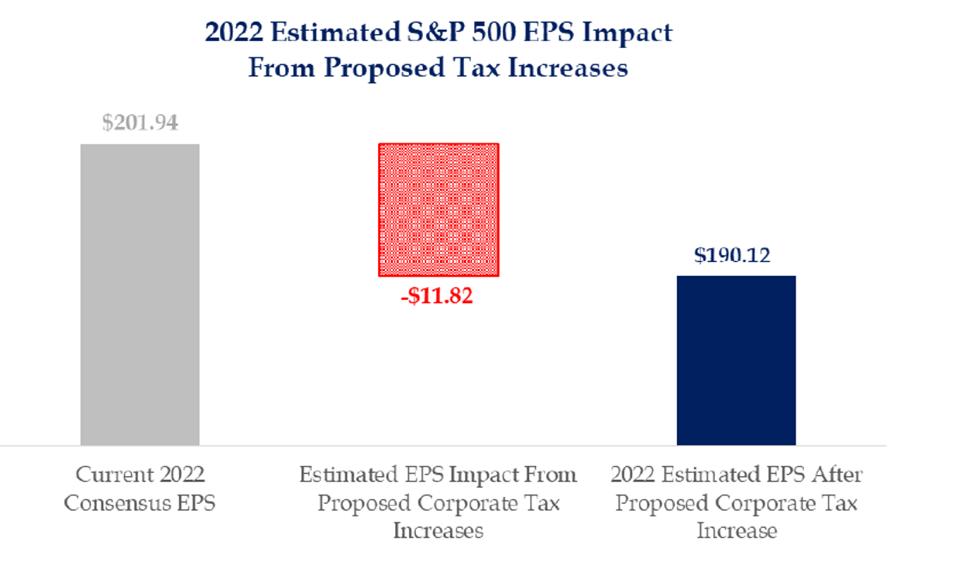 There are tax increases in the works for 2021. President Biden announced before the election and subsequently affirmed that he wants the corporate tax rate to increase to 28%. There are multiple components to taxing corporations, they all have the potential to influence stocks, their value, and the markets.

Raise the maximum corporate rate: This is a cornerstone of the proposed tax increases. This is an increase from the current 21% to 28%. This is estimated to raise $1.3 trillion in additional tax revenue. It eliminates about half the tax cuts instituted by the Tax Cuts and Jobs Acts (TCJA). Corporate taxes are an expense to a corporation and reduce the amount of net profit. According to Strategas, a change in the corporate tax and a change in the Global Intangibles Low Tax Income (GILTI) rates would decrease S&P 500 profits by about $11.82 in 2022. Stock tend to migrate on values based on their Price Earning (PE) ratio, and if earnings (‘E’) goes down, the prices go down.

GILTI or Not-GILTI? Another component of the Proposed tax increase is to increase the minimum tax on Global Intangible Low Tax Income, or GILTI. This would increase taxes to those businesses by about $309 billion. The tax will be imposed on companies with large income in low-tax venues (like Ireland at 12.5%). GILTI was imposed in the TCJA to remedy the ‘offshoring’ of profits. However, subsequent regulation by the Treasury and substantial lobbying changed the effectiveness of the GILTI. The change would raise taxes on companies using a foreign subsidiary in low-tax venues to cut its taxes. This tax was in part predicated by Apple having profits of $74 billion from 2009-12 on worldwide sales and paying virtually no taxes. The GILTI change seems probable, and will adversely affect some companies with foreign subsidiaries in low-tax venues.

Specific Industries: The Prospective tax changes in the President’s original proposal also called for changes to depreciation for Real Estate, especially multifamily and commercial real estate. Those industries would have increased taxable income. This could particularly modify the valuation of certain Real Estate Investment Trusts (REITs).

Minimum Tax on Book Income. This is a pretty new idea, and an interesting one. For almost as long as we’ve had accounting, we’ve had differences between tax income and ‘book’ income. Book income is the income reported by a company on its financial statements. Some examples of this include cash versus accrual accounting; cash basis recognizes revenue and expenses when cash is received and/or paid; and accrual recognized revenue and expense when it is earned or accrued. Another good example is depreciation, a company might use a conservative depreciation schedule for book income (making the income larger) and using accelerated depreciation for tax purposes (which lowers taxable income). A major difference is the use of inventory valuation. Firms with lots of inventory might use Last-In First-Out (LIFO) for tax purpose and First-In, First-Out (FIFO) for book purposes. If a company has a lot of inventory of increasing value (because of price increases), LIFO reduces taxes by reducing taxable income, and FIFO increases income.

Having a minimum tax on book income would have companies pay a significant amount for tax based on what they report to their shareholders, versus what they report to the government. The proposed tax is a 15% tax on companies with net income more than $100 million. At least one commentator estimates the tax on book income would increase the tax burden on new investment by 8.75%.

Bottom Line: Taxes Decrease Profits. It seems highly likely that some or all the tax provisions mentioned above will wend their way into the next major legislation. Some provisions are potentially popular, like taxing the income of low-tax foreign subsidiaries. However, as the Tax Cuts and Jobs Act in 2017 increased corporate profits, prospective tax increases will decrease corporate profits. Decreased corporate profits translates to the lower valuation of stocks. It’s wise to look at your portfolio and review the potential effects on your investments, as well as your overall plan. As always, I’ll try to answer questions. My email is llabrecque@sequoia-fiancial.com. For a copy of our free-book on IRAs, click here.