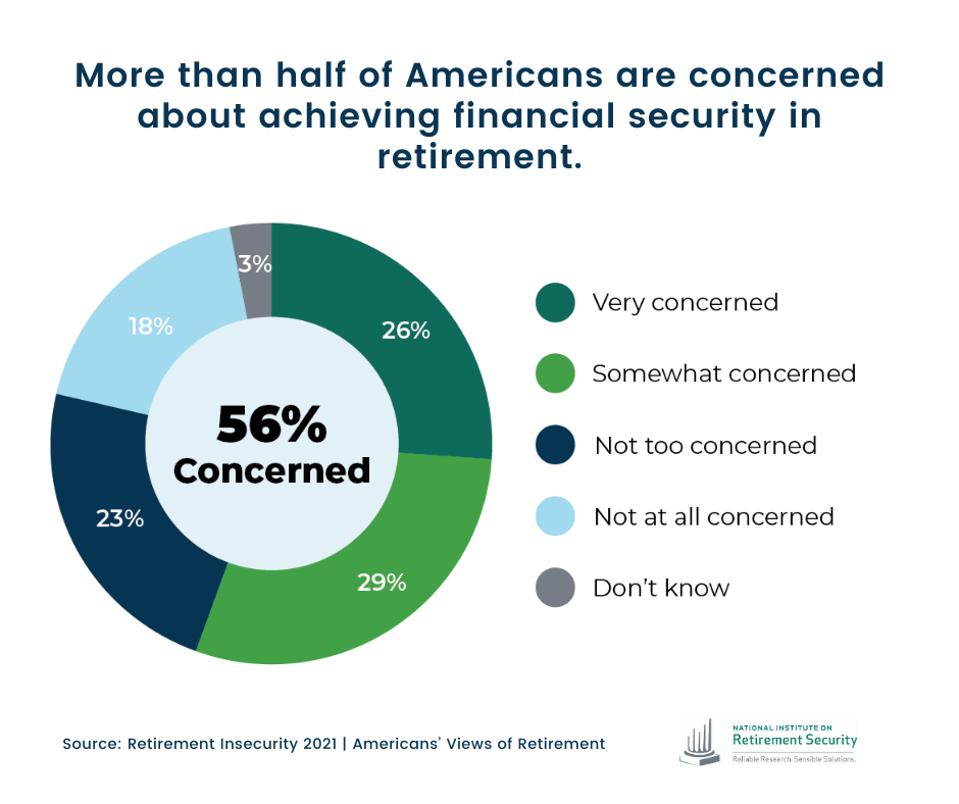 Now that the latest COVID-19 relief package has been signed into law, the Biden administration is poised to tackle broader issues – from climate change to immigration reform. Already, there are strong disagreements on these and other policy areas as Congress and the nation remain deeply divided.

But, there are a few issues that enjoy bi-partisan support amid political discord. Seemingly, it would make sense to continue the policy wins momentum by moving forward on issues of concern on both sides of the aisle, particularly policies that can help Main Street pocketbooks. One such issue is solving the nation’s retirement savings crisis.

The past several decades have seen dramatic changes to the U.S. retirement system that have turned the American Dream of retirement into a nightmare for far too many workers.

Thanks to an unfriendly regulatory environment, fewer employees have pensions that provide stable and secure retirement income that won’t run out. Most employees instead now rely on riskier individual accounts like 401(k) plans that were intended to supplement pensions, not replace them. Meanwhile, increases to the Social Security retirement age translate into income cuts for retirees. And even more troubling is the fact that about half of the workforce doesn’t even have an employer-sponsored retirement plan, which has proven to be the best path to preparing for retirement.

Layer on yet another economic crisis, low wages, skyrocketing healthcare and housing costs, and longer life spans, and it’s easy to understand why a new national survey found that most Americans are worried about retirement. In fact, the Boston College Center for Retirement Research estimates that about half of U.S. households are “at risk” of not having enough money to maintain their living standards in retirement.

Clearly, there’s an economic imperative to address this massive retirement savings shortfall as workers continue to age. Given that Americans are united in their retirement concerns, it seems the political environment is conducive to taking policy action now before the savings crisis worsens. Recent national polling of working-age Americans finds that the vast majority of Democrats (70 percent), Independents (70 percent) and Republicans (62 percent) agree that the nation faces a retirement crisis. There also is bi-partisan agreement that the average worker cannot save enough on their own to guarantee a secure retirement, along with broad bi-partisan support for Social Security and pensions.

Unless policymakers seize this moment and take action, we’ll stay on a path to a predictable and unfortunate outcome – millions of working Americans unable to meet their basic needs in retirement. That forecast is grim not only for millions of older Americans, but also for their families who would have to step in to provide financial support. And of course, failing to plan ahead will result in increased costs for safety net government programs that support seniors.

Here are four pragmatic and politically feasible initiatives that policymakers could pursue to course-correct and put Americans back on track to retire with enough income to be self-sufficient in their golden years.

A first step in addressing the retirement crisis should be to work quickly to shore up Social Security’s financing in a fashion that protects benefits and ensures the trust fund is sustainable. Here again, there is bi-partisan support. Eighty-two percent of Republicans say that Social Security should remain a priority for the nation no matter the state of budget deficits, followed by Democrats at 81 percent and Independents at 77 percent.

And Americans support steps that will ensure Social Security remains viable for future generations. Sixty-four percent of Democrats support such a move, as do 61 percent of Independents and 58 percent of Republicans.

For example, the Biden campaign called for raising the Social Security income tax threshold to include those making more than $400,000 annually, which could generate more than $700 billion in revenue over a decade. Whatever path lawmakers take to shore up the funding, another policy discussion is going one step further to expand the program.

Given the large role Social Security plays in providing retirement income for lower and middle income Americans, expanding benefits is one of the most direct paths toward relieving the burden of retirement for working families. Expanding Social Security benefits could take several forms. It could be an across-the-board increase in benefits either by a certain dollar amount or by targeting a slightly higher replacement rate of pre-retirement earnings. Expansion also could mean plugging holes in the existing system by increasing the minimum benefit level, which would take aim at reducing elder poverty. It also could involve establishing caregiver credits for people who take time out of the workforce to care for children, a spouse or parents.

Long-term care has received a renewed focus given the toll COVID-19 has taken on the nation’s nursing homes. According to the Kaiser Family Foundation, more than 178,000 older Americans have died in nursing homes or other long-term care facilities due to the coronavirus.

More broadly, it is imperative that Congress and the Biden administration think seriously about long-term care because a growing number of Baby Boomers are retiring at a time when it is becoming increasingly difficult to afford the costs. As a result, many older American families find themselves forced to spend down their assets so they are eligible for long-term care coverage under Medicaid, putting even more pressure on this program. In fact, a recent report detailed Medicaid’s role as the largest payer of long-term care costs in the nation.

One model to consider would be an innovative social insurance program in Washington State. Launching in 2022, Washington residents will pay 58 cents of every $100 earned into a long-term care trust fund. After ten years, residents can claim up to $100 a day in benefits, with a lifetime cap of $36,500. While the lifetime cap may seem small, it could go a long way for many older Americans with more manageable long-term care needs. And, Washington State expects to reduce Medicaid costs with this program.

During the campaign, President Biden released a substantive proposal to reform the tax credits associated with retirement savings. The current tax structure provides deductions that benefit high-income earners, but do little for low-income earners, especially for those with little or no tax liability. Reforming these tax benefits to promote savings across the income spectrum would empower low-income and middle-income workers to save more for their future.

More importantly, such a proposal would create an “automatic 401(k) plan” for workers who do not have a retirement plan through their employer. Such action would be a bold step, though states have grown impatient and moved forward on their own. This solves a chronic problem that has plagued the nation’s retirement infrastructure for decades – there is a large gap in access to frictionless savings plans for far too many Americans. This would make retirement plans available to nearly all workers through their job.

Auto-enrollment in retirement plans isn’t a new idea, and many employers already automatically enroll employees in their plans. In fact, auto-enrollment has been highly successful in increasing retirement plan participation and savings outcomes, especially when it is combined with auto-escalation. According to the Society for Human Resource Management, more than 40 percent of employers automatically enrolled new employees into a retirement plan in 2019, and another 19 percent offered automatic escalation of contributions.

Now, lawmakers are looking at requiring both auto enrollment and escalation. Such proposals are included in the Secure Act 2.0, the latest legislation to help address the retirement crisis. Increasing the utilization of auto-enrollment is a big step forward in increasing savings. According to Vanguard, nine in 10 new hires remained in their employer’s plan after three years when automatically enrolled.

The auto-enrollment portion of the legislation only applies to newly-established plans. Also, it allows participants to opt out of enrolling or increasing their contributions. It’s important to recognize that mandates are not always well-received. However, if past is prologue, expanded use of auto-enrollment can help fill the retirement savings hole.

Two things are clear: Economic security is a top priority for Americans and political division persists. Enacting retirement policy solutions would be a win-win for the country — delivering real financial relief for working families on an issue that transcends political affiliation.

2021 Tax Guide For Americans Living, Investing, And Working Overseas
‘We need at least one more check.’ The case for a fourth stimulus payment
Airline executives cast doubt on European summer vacations with borders still closed
PepsiCo revenue rises 6.8% despite unbalanced economic recovery outside of the U.S.
As pandemic aid was rushed to Main Street, criminals seized on Covid relief programs