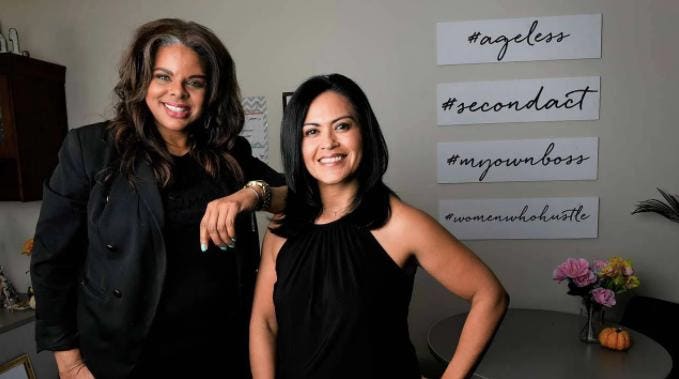 By Kerry Hannon, Next Avenue

It was the shockwave of rejection letters from hiring managers that goaded Guadalupe Hirt and Barbara Brooks to launch SecondActWomen, a Denver-based company designed to help working women in their 50s and older (and also some in their 40s) start companies, pivot careers and stay employed. “They didn’t even give us a chance,” Brooks said.

That was three years ago, when Hirt and Brooks, now 47 and 54, were mad as hell and not gonna take it anymore to paraphrase the line from the film “Network.”

Both women had long careers as marketing and public relations strategists. Hirt’s mojo had been entrepreneurial, founding or co-founding four firms. Brooks had worked primarily for corporations. In 2011, she launched her own agency, then pivoted five years later to partner with Hirt, a longtime friend, on the start-up, DECIBEL Marketing.

But in 2018, the pull of a steady paycheck, employer-provided health benefits and the chance to save more for retirement drew both women to pursue full-time, in-house positions — unsuccessfully. And that’s where the idea for SecondActWomen took shape.

Recently, they launched the #ShopWomenOwned4050 initiative, a virtual marketplace promoting and supporting more than 50 small businesses owned by women over 40 to drive holiday shopping to them.

I spoke with Hirt and Brooks about their zeal to assist women in the second half of life and to help some start businesses. Here are the highlights of our conversation:

Kerry Hannon: How did the idea for SecondActWomen come about?

Barbara Brooks: I had an idea to start a company to help women entrepreneurs that had been on the shelf for a while. I roped Lupe in, and we started hosting brainstorm sessions with women of all ages about what they would like to see in a women’s organization. But it just so happened that most of our friends were in their 40s and 50s.

And I had this aha moment­ — it was women over 50 saying they wanted to do their own thing. They wanted to live their own life. They were feeling invisible, instead of invincible.

How large is your SecondActWomen community now?

Guadalupe Hirt: Our SecondActWomen community is about sixty-five hundred women and growing.

We originally pursued our Denver community, but we now serve entrepreneurs all over the world who are starting up or looking to grow their business or start a side hustle. And we have the corporate women who have been laid off and are looking to find a position in corporate America.

The third facet is the woman who is stepping into middlescence, as [author and gerontologist] Barbara Waxman calls this lifestage, and looking to connect with other like-minded women for support systems, camaraderie and collaboration.

Barbara Brooks: We host peer-to-peer workshops, conferences, retreats and intensive boot camps. Topics include finances and business planning, personal branding and business branding. We bring in women who are experts to give them a foundation.

Guadalupe Hirt: We currently have a business directory that features women-owned businesses. Currently, around forty businesses owned by women over forty are featured on the site.

We also co-host “Morning Cup,” a thirty-minute livestream show that covers business and life topics every Thursday morning in our Facebook private group. We’ve covered things like imposter syndrome, starting up [a business] and ageism in the workplace. We also now have a new Ask the Expert-type show called The Scoop, where we host experts in a wide variety of fields.

What makes your community unique?

Barbara Brooks: It’s the peer-to-peer component. We’re getting women to be proud of the age and chapter they are at.

This is who we are. We are adventurous and we are experienced. We are at the top of the hill, not over the hill. We are asking: ‘What is the next thing I want to do when I grow up?’ It’s so powerful.

Where are you going next­­­, post-pandemic?

Guadalupe Hirt: We are moving into hybrid events in the fall where we will be not just in person or online. In tandem, we’re looking at how to expand footprints to create communities like we have here in Denver to build camaraderie and support systems.

Barbara Brooks: We’re also planning an employment event, so we don’t leave women looking for jobs behind. As women of color of a certain age, we understand that we are the ones being tossed out quicker.

What are the obstacles you have had to face since launching?

Guadalupe Hirt: We self-funded; the financial ups and downs have been a challenge.

Second, we started as an event company with one mission, and it has now turned into a multi-faceted business. That has been challenging from a scaling perspective.

What’s your advice for women thinking of starting a business now?

Barbara Brooks: You can start a business because it has been a hobby or something you have always wanted to do, but you have to have a business plan, a road map and know all facets of your business.

You can’t build a company without knowing your numbers and having a strategy. Otherwise, you are throwing stuff in the wind.

Guadalupe Hirt: Take stock of your assets. Being an entrepreneur is hard. It is mentally, physically and financially hard. Understand what your hard skills are, what your soft skills are, where are the opportunities to learn from your competition, what has worked in the marketplace and what hasn’t, so when you go to create and formulate you have the underpinnings set.

Have that reflection first, so you know what you bring to the party and where you need to hire an expert to support you. Often, we get set in this mentality that ‘I have to do everything.’ There is a point in time when time is money, and you need to make money.

Barbara Brooks: One more thing: have an accountability partner or an advisory board.

Guadalupe Hirt: Find yourself a community; it doesn’t have to be ours. Entrepreneurship is difficult. If you can surround yourself with a community to support you, when you hit your lows, you have someone to fall back on. It keeps you motivated.