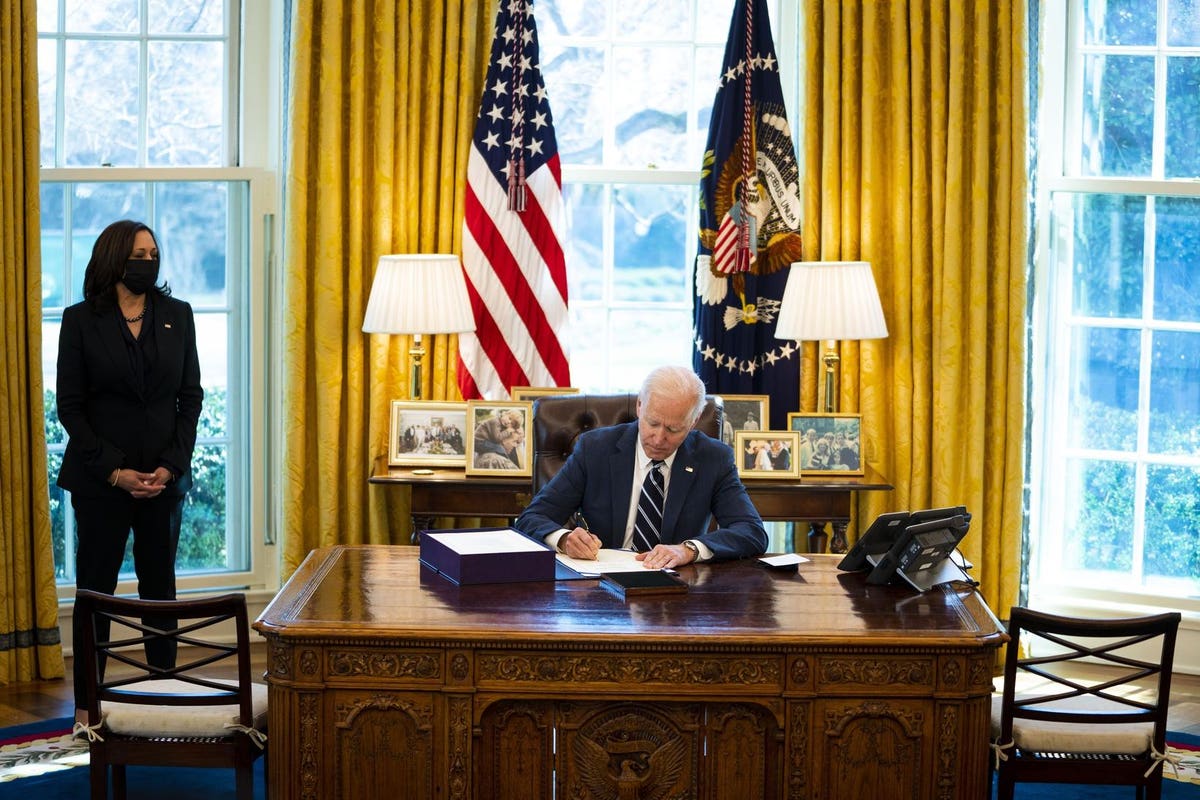 Municipal bond rating agencies reacted positively to the bill.  Moody’s Investor Services changed their outlook for state and local governments from “negative” to “stable,” based on both the relief package and positive economic forecasts  (Nobel economics laureate Paul Krugman’s “wonky” explanation explains the Biden package should be viewed as “relief,” not “stimulus.”  The new spending is more like disaster relief after a hurricane or earthquake than it is conventional business cycle stimulus.)

There’s a lot for states and cities in the relief bill.  There’s $325 billion in direct aid to states and local governments.  There’s a separate $168 billion allocation for education, a primary state and local expense, covering both K-12 and higher education.  Some say that “governments are awash” in money, and can take on postponed projects and hiring.

And to speed up vaccinations, support public health, and fight the pandemic there are hundreds of billions more, which is critical for economic recovery.  As Forbes contributor Teresa Ghilarducci told us last June, the economy can’t recover until the virus is defeated.

That lesson still hasn’t been learned by the governor of Texas and other public officials.  They are ignoring the Centers for Disease Control guidance to keep our guard up through masking and other safety measures, risking more disease and deaths and a slower recovery through what President Biden called “neanderthal thinking.”

In addition to the relief package, forecasters now think cities can benefit as the U.S. economy rebounds more strongly this year when the spending kicks in while vaccinations drive us towards “herd immunity” and a return to normal economic activity.  The Organization for Economic Cooperation and Development (OECD)just boosted their estimated global growth in 2021 to 5.6%, around a 1/3rd increase.  But that’s dwarfed by their new forecast for the U.S. economy which is now projected at 6.5% for the year, essentially doubling their December prediction.

Chernick is one of the nation’s top experts on municipal budgets and economics.  Along with his colleagues Andrew Rechovsky and Adam Langley, he has produced the incredibly detailed and valuable “fiscally standardized cities” data base for the Lincoln Institute of Land Policy.  The data base makes it possible to “compare local government finances for over 200 of the largest U.S. cities across more than 120 categories of revenues, expenditures, debt, and assets.”

In the seminar, Chernick updated a paper from last fall in the National Tax Journal evaluating the “potential fiscal effects on cities of the coronavirus-induced recession.”  That paper estimated FY2021 average revenue losses for 150 major cities at between 5.5% and 9%, with hardest hit cities facing “revenue losses of 15 percent or more.”

Of course, averages don’t tell the whole story.  Cities dependent on substantial state aid or more volatile revenue sources like sales taxes face greater shortfall risks.  And cities relying more on property taxes, traditionally a more stable source of revenue less subject to swings, usually face lesser risks.  In their fall 2020 analysis, Chernick and his colleagues found high risks facing cities like Rochester and Buffalo, due to heavy dependent on state aid.  In contrast, fewer risks were faced by cities like Boston and Austin, due to their reliance on property taxes.

But in the seminar, Chernick reported the situation might be changing.  Many state budgets haven’t been hit as hard as first feared in the pandemic, so state aid to cities might be more available.  On the other hand, downward pressure on property tax revenues could grow this year, especially for offices, hotels, shopping malls, and retail and restaurants.  And downgraded tax assessments from reduced real estate values could make the revenue problem worse.  Law firms and other advisors are actively laying out strategies for property owners to claim reduced assessments if cities don’t provide them.

Chernick and his co-authors also remind us that city budgets have two parts—revenues and spending.  And Covid-19 has caused city budgets to rise in several categories. In particular, health care, housing aid for the homeless and low-income renters, and education with reduced class sizes and stronger health care protocols all are putting pressure on cities to increase spending, not reduce it.

A combination of reduced property values and permanent increases in Covid-19 related spending increases could put substantial longer-term pressure on city budgets.  If interest rates rise as the economy heats up, cities also could pay more to borrow, although economic growth will also increase their revenues.

And the relief package will pressure cities to take on new long-term obligations, everything from paying police officers to installing broadband to expanding their coroner’s offices.  But they may not have matching long-term revenues.

So the Biden relief package is welcome news for city budgets, but it’s a one-time injection of funds.  Chernick still worries about substantial revenue shortfalls, perhaps spread out more over time.  All advocates of cities should share his concern.

Some states require amended tax returns for $10,200 unemployment tax break refunds
U.S. small business closures are ticking back toward Covid pandemic highs
Powell says it’s ‘highly unlikely’ the Fed will raise rates this year, despite stronger economy
Bobbi Brown, Ginni Rometty and other CEOs share their advice for the next generation of women leaders
What Can Wedding Bells Tell Us About Hotels After The Pandemic?