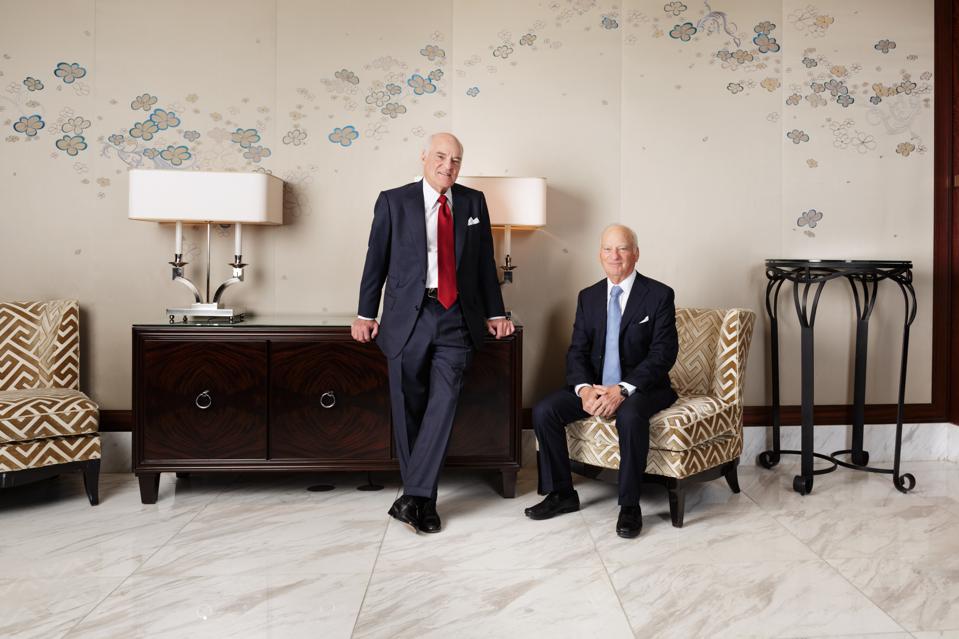 Get ready to add the biggest blue chip private equity firms to your 401k.

The world’s largest buyout firms like Blackstone Group, co-founded by billionaire Stephen Schwarzman, KKR, built by billionaire pioneers Henry Kravis and George Roberts, and Carlyle Group, are now eligible to be included in the S&P 500 Index, the benchmark millions of passive investors use to invest their retirement savings, according to Forbes’ analysis.

Over the past fifteen years, these three firms have transformed from clubby partnerships into massive global corporations, publicly traded on the New York Stock Exchange. As they’ve increasingly adopted the size and shape of the corporations they target in takeovers, industry leaders like Schwarzman and Kravis have continually increased their focus on becoming a part of the portfolios of public stockholders. In the years before and after the crisis, the big buyout firms went public, listing their partnerships on stock markets. Then, after a frustrating spell on public markets, they converted from partnerships to corporations between 2017 and 2020. The final and potentially most valuable step in their transformation, has come recently from complex changes made in the fine print of their voluminous financial disclosures.

Presently, no private equity firm is part of the S&P 500 Index, though Blackstone, KKR, Apollo Global and Carlyle are all large enough to meet the index’s eligibility. The smallest members of the S&P 500 Index have market caps of about $6 billion and the S&P’s index committee requires market caps of about $10 billion as a minimum. Currently, Blackstone, with a market cap of $84 billion is one of the largest companies not included in the S&P 500. KKR carries a $44 billion market cap, while Carlyle sits at $12 billion. Thus private equity, one of the most stable, fastest-growing and profitable businesses in the world, remains un-represented in the S&P 500. Thus, financial sector exposure for the index is more likely to come from slower-growing and more leveraged banks and insurers.

The problem for buyout barons like Schwarzman was that even as corporations, firms like Blackstone held dual class stock structures, which the S&P 500 index committee had barred from index inclusion. A year ago, Schwarzman was frustrated with the status quo. “We’re not yet in the S&P 500. It sort of surprises me because there are many, many companies that have dual class voting that are in the S&P,” he told analysts.

However, Schwarzman found a solution. In Blackstone’s 10-k filing for 2020, it disclosed that the firm had reclassified its Class B an Class C common stock into a new Series I and Series II preferred stock, effectively eliminating the dual class structure, which precluded it’s inclusion to the S&P 500. The change meant that Blackstone’s partnership and management company, which remain controlled by insiders like Schwarzman and billionaire company president Jonathan Gray, are now in the form of preferred stock. But for the S&P 500 committees benefit, the company has renamed its Class A common stock as just “common stock.”

Carlyle led the way in January 2020, when it completed it’s conversion to a corporation and abandoned a dual class stock. In May, Forbes has found that KKR was the first to reclassify its Class B and Class C shares into preferred stock, a move matched by Blackstone last month. Apollo Global Management, which is changing leadership in the fallout of the Jeffrey Epstein scandal, is not far behind. As part of its $11 billion merger with its insurance arm Athene, announced on Monday, Apollo will convert its dual class stock to a single class. Ares Management still carries a dual class stock and a litany of smaller players like Hamilton Lane and GCM Grosvenor seem too small currently to qualify for the S&P 500.

“We believe Apollo, Blackstone, Carlyle Group and KKR may be eligible to join the S&P 500 Index,” says Melissa Roberts, an analyst at Keefe Bruyette & Woods. Woods notes that the S&P index committee doesn’t actively reconstitute benchmarks, so companies eligible for inclusion can wait for months or even years before being added. S&P Global declined to comment when reached by Forbes, citing its policy to not comment on single companies. Adds Roberts, “Based on our review of 10-K disclosures, we believe Blackstone, Carlyle, and KKR currently meet the requirement of having a single class of common stock,” while Apollo’s classification will change with the completion of its Athene merger, expected by 2022.

There is some nuance to Blackstone and KKR’s changes. “The preferred stock does not participate in corporate growth to any significant extent, but does provide for a fixed, preferential dividend. The preferred stock would have a priority claim on earnings, up to its fixed dividend, and would have a priority claim (over the common stock but behind any indebtedness) on assets in the event of liquidation,” says independent tax expert Robert Willens. “The main thing here is that the recapitalization would allow the single class of common stock to be included in the various indices, most notably the S&P 500.”

Another potential hurdle is also in the rear view mirror. The S&P index committee requires firms to have reported a profit in its most recent quarter and an accumulated profit over the prior year. It was one of the reasons Tesla was kept out of the S&P 500 for years, even as its market cap eclipsed General Motors and Ford. Then, due to regulatory credits, Tesla eked out a GAAP profit last year and joined the S&P 500, skyrocketing by 30% during its inclusion, only to fall back to earth.

The Covid-19 crisis caused markets to plunge and firms like Blackstone and KKR to report quarterly losses based on new marks to their sprawling investment portfolios. But as markets recovered so did their investments, as firms generated massive profits. For 2020, Blackstone earned $2.2 billion, while KKR earned $1.9 billion, making both eligible based on S&P’s criteria.

The potential inclusion to the S&P 500 may be yet another windfall for the likes of Schwarzman and Kravis. After resisting converting from partnerships to corporations for years, PE firms relented in the wake of the Trump tax cuts, seeing a tradeoff to lose some partnership tax savings, but benefit from broader stock market ownership and rising valuations. Private equity stocks skyrocketed. After trading in the $20s and $30s for most of its life, Blackstone doubled in the year after converting. It now trades at $70 and early in the pandemic boasted a larger market capitalization than Goldman Sachs and Morgan Stanley.

There’s an irony of course. Firms like Blackstone and KKR are legendary on Wall Street, investing money on behalf of the biggest and most powerful investors in the world like sovereign wealth funds and pensions. Their funds are meant for the most sophisticated or wealthiest investors and their objective is to beat the market.

Regeneron to request FDA clearance to use Covid antibody drug as a preventative treatment
Will Coronavirus Close The Open Concept Kitchen?
Warning To Adult Children With Impaired Aging Parents: Pay Attention To Their Real Estate
Deciding What To Do With The 401(k)s You Left Behind
Carnival says bookings are rising at record pace, could switch home ports if US rules are too restrictive