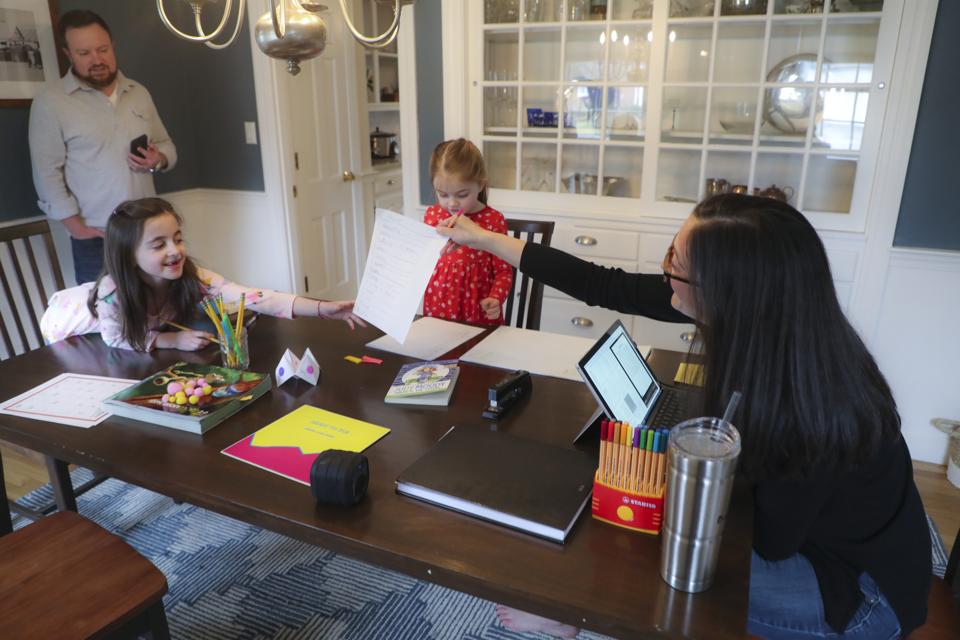 Employment and real estate markets remain agitated by the Covid-19 pandemic, with some predictions of a major shift to working from home that will in turn radically change urban real estate markets and city budgets.  In this first of three blogs, I’ll look at the homework issue, especially on the underappreciated power of employers.

Two recent pieces of news are revving up the homework discussion.  Respondents to a new Gallup Poll said 56%—more than half—of all U.S. workers are “working remotely all or part of the time,” consistent with Gallup’s earlier polling but higher than other estimates.

And in San Francisco, tech giant Salesforce
, which provides cloud-based management of customer relationships, said employees will work “flex” (one to three days in the office), full-time at home, or full-time in the office.  The company expects the full-time group will be the smallest of the three, with Salesforce President Brent Hyder saying “the 9-5 workday is dead.”

But is it?  Gallup’s numbers are much higher than the U.S. Bureau of Labor Statistics (BLS), which has added Covid-19 related questions to its monthly household survey.  BLS in January reported that 23.2% of people employed did some paid work at home because of the pandemic.  That’s down from last May’s high point of 35% but up slightly from recent months.

While that’s a big number (almost a quarter of all workers) it is far from Gallup’s claim of over half.  Other studies have supported Gallup-type numbers, including an MIT study from last spring, which found “about half” of workers were working some from home, driven by a major shift from commuting.

Of course, high percentages of jobs in some sectors—hospitality and hotels, restaurants, health care, construction, manufacturing, personal services like hair salons—can only be done in person. (Remember the surveys ask if people did any work from home, not if they are working entirely at home, a much smaller percentage.)

The higher teleworking numbers suggest that more industries and occupations now incorporate at least some work time at home.  Before Covid-19, BLS reported actual takeup rates—jobs where telework was feasible and people actually did it—were between 22% and 25%.  That’s likely increased now, but it still isn’t clear how big or how permanent those changes will be.

Remember teleworking decisions ultimately are made by employers, not employees.  Companies like Salesforce already had extensive telecommuting.  Prior to the pandemic, around 40% of Salesforce workers only were in the office from one to three days per week, and the company expects that will rise to 65% with the new policy.  That’s a significant increase, but it isn’t a jump from zero to 100%.

The McKinsey Global Institute reported last fall on how 800 CEOs said their company is adjusting to the pandemic, finding less sweeping changes that underscore employers’ control of work.  In addition to accelerating use of AI and automation, the executives outlined a limited teleworking future for most workers.  15% of CEOs said “at least one-tenth of their employees could work remotely one or two days a week going forward,” but only 7% were willing to consider three days or more for even that minimum one-tenth.

McKinsey noted remote work is “highly concentrated in a handful of sectors, such as information and technology, finance and insurance, and management.” For many workers and firms, telework simply isn’t a significant option.

Last April, BLS raised the overall estimate of some potential telework to 45.8% of all jobs.  But they emphasized that’s potential, not actual.  Prior to the pandemic, between 22% and 25% of workers who could potentially telework did so, so the actual takeup rate “was quite low.”

And access to telework is unequally distributed.  Last spring, the Economic Policy Institute reported that prior to the pandemic “only 16.2% of Hispanic workers and 19.7% of Black workers” could telework at all, compared to 29.9% of whites.  And in January, BLS reported 22.8% of employed whites, 18.8% of Blacks, and 13.8% of Hispanics did some teleworking.

The same BLS report shows education is highly correlated with teleworking, due to the underlying industry-occupational distribution.  In January, only 8.1% of workers with a high school education did some teleworking, compared to 37.3% of college graduates and 51.2% of those with post-graduate degrees.

Women did more teleworking than men.  But child and dependent care impacts from school closings and other social services are pushing women out of the labor force altogether.  Economist Ernie Tedeschi estimated last fall that three times as many women as men were dropping out of the labor force due to the pandemic.  And some fear teleworking women will be pushed into a new “mommy track” that limits their career opportunities.

Companies are still struggling with pandemic-related adjustments.  Post-vaccination, some that now permit teleworking could go back to a largely office-based world for many jobs.  There likely will be adjustments for some occupations in some industries, with consequences for commercial real estate and employment and budgets in cities that we’ll explore in subsequent blogs.

But keep in mind before deciding teleworking is your future is that employers—not employees—ultimately decide who gets to telework and how much.  Salesforce’s Hyder further underscored employer power when he said “the 9 to 5 workday is dead.” That could well mean teleworkers must be available 24/7, with unknown effects on family life, child rearing, and work-life balance.  Given that choice, many workers might prefer a more predictable, regular work routine that separates work from the rest of life.

The coronavirus pandemic, nearly a year long, is hitting students of color the worst
Black-owned beauty brands and founders breaking billion-dollar barriers
The “Hey Hey Just Don’t Pay” Tax Strategy
How You Can Prepare For Climate Change
Robinhood is still on track for a hot IPO despite the GameStop controversy