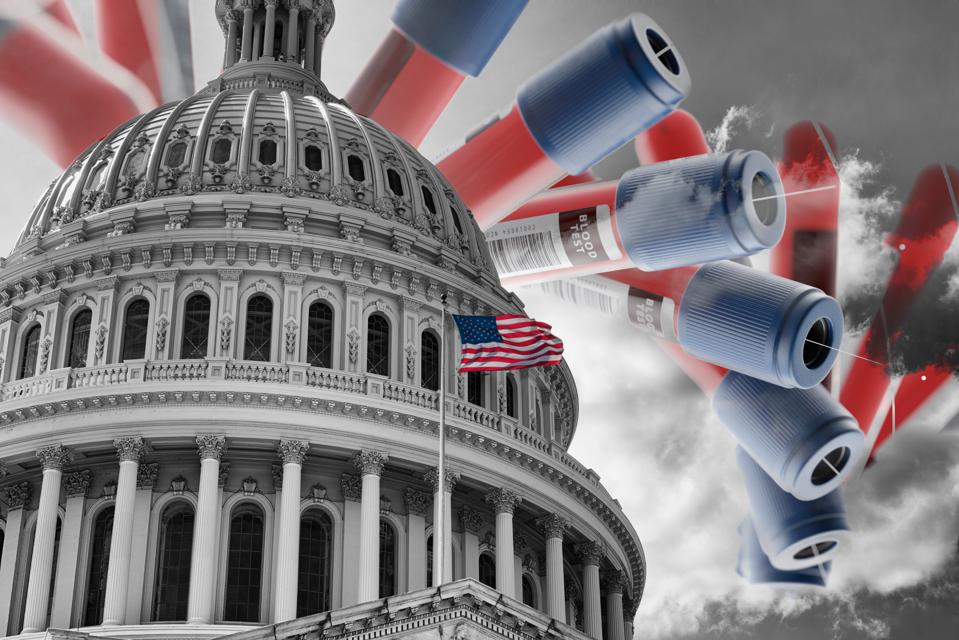 The Trump and Biden campaigns agree on at least one thing: Tax credits for families with children are political winners.

Joe Biden’s campaign lists as one of its tax priorities expanding the child tax credit as proposed by the Health and Economic Recovery Omnibus Emergency Solutions (HEROES) Act (H.R. 6800) “to help families through the crisis.”

That’s a short-term plan for 2021, although the campaign says it would continue it “as long as economic conditions require.” The long-term tax benefits the Biden campaign proposes for families are tax credits for health insurance, child care and elder care, and first-time homebuyers.

The temporary proposed expansion would cost $110 billion, according to estimates by the Penn Wharton Budget Model. Making the expansion permanent would cost $1.4 trillion over the 10-year budget window, the model says.

It also estimates that taxpayers in the bottom two income quintiles would receive 44% of the overall benefit and that after-tax incomes would rise by 9% for the bottom quintile.

President Trump hasn’t proposed changes to the child tax credit beyond its expansion in the Tax Cuts and Jobs Act as part of his reelection campaign, but his campaign promotes the doubling of the credit as one of the major achievements of the TCJA. It’s the first specific provision listed in the explanation of the TCJA on Trump’s campaign website touting his economic achievements.

Introduced in the Taxpayer Relief Act of 1997 (P.L. 105-34), the original child tax credit provided a $500 credit per qualifying child under age 17, phasing out for single taxpayers with adjusted gross incomes above $75,000 and married taxpayers filing joint returns with AGIs above $110,000. The credit wasn’t indexed for inflation.

In 1997 the House Ways and Means Committee explained that it believed “that the individual income tax structure does not reduce tax liability enough to reflect a family’s reduced ability to pay taxes as family size increases.”

The committee report accompanying the bill pointed to the decline in the value of the dependent personal exemption over the previous 50 years as one reason for that.

Also, “the Committee believes that a tax credit for families with dependent children will reduce the individual income tax burden of those families, will better recognize the financial responsibilities of raising dependent children, and will promote family values,” the report concludes.

Two decades later, the TCJA expanded the child tax credit from $1,000 per qualifying child to $2,000 until 2026, and a further expansion is possible. Ways and Means Committee ranking member Kevin Brady, R-Texas, recently identified extending the $2,000 child tax credit beyond 2025 as a Republican priority.

The TCJA changes moved the needle for approximately 550,000 children living in poverty by lifting them above the poverty line, according to a 2019 report by the Institute on Taxation and Economic Policy (ITEP), but changes to the credit could improve the situation for more children.

According to a recent report from the Urban-Brookings Tax Policy Center, the current child tax credit will deliver about $1.1 trillion in benefits over 10 years, but less than 10 percent of that will go to families with incomes in the bottom quintile, and nearly half will accrue to families in the top two quintiles.

The child tax credit is one of the largest tax expenditures in the code.

At a total of $270 billion for 2016-2020, it was well below some of the biggest expenditures at that point, which topped out at $863 billion for the exclusion of employer contributions for healthcare and $678 billion for the reduced rates for dividends and capital gains, and less than the expenditure on the earned income tax credit, which was $373 billion.

The total of $596 billion between 2019 and 2023 moved it above the EITC, which was projected to cost $366 billion, but that was below the largest expenditures, which were the employer healthcare exclusion at $934 billion and the reduced rates on capital gains at $845 billion.

One problem with the child tax credit is that it’s poorly targeted to low-income families, said Angela Rachidi of the American Enterprise Institute. If the goal is to help low-income families, the EITC would be a better provision to focus on, because that credit already targets taxpayers with incomes under $50,000, she said.

ITEP reported in 2019 that “one-third of children are in families who earn too little to receive the full Child Tax Credit.” Addressing the effectively smaller tax benefit for the families that need the most financial help is one possibility for reconfiguring the credit, and it wouldn’t be a new debate if Congress decided to take it up.

Expanding the credit that way was discussed in the lead-up to the TCJA. Lily L. Batchelder of the New York University School of Law pointed out to Congress that “the CTC excludes almost 11 million children with working parents because their earnings are too low,” and she suggested that the income threshold for receiving the credit be eliminated.

The ideal design for the child tax credit ultimately depends on lawmakers’ policy goals. As a measure to alleviate child poverty, the credit is already quite successful, Betsey Stevenson of the University of Michigan noted in her testimony to Congress on September 11.

She added that a group of poverty scholars recently expressed support for expanding the child tax credit, arguing that it is “the single best thing the nation can do to confront child poverty.”

She noted that the COVID-19 crisis has hit low-income children hard, which bolsters the argument for expanding the amount and refundability of the child tax credit. But reducing child poverty is one of several objectives that lawmakers could be trying to achieve with the credit, and those disparate purposes are reflected in its design.

In addition to a mechanism for helping alleviate child poverty, lawmakers might view the credit as the 1997 Congress evidently did — as a means of reducing families’ tax liabilities to reflect the impact of family size on ability to pay. The credit is also a way that Congress might choose to implement stimulus efforts.

The pandemic caused upheaval for many families because of school closings, and the economic fallout seems to have hit families with low and middle incomes the hardest.

Consequently, the pandemic relief proposals include child tax credit increases that are intended as economic stimulus.

Amy K. Matsui of the National Women’s Law Center explained in testimony to Congress that an income boost in the form of a refundable credit makes a critical difference to the health and educational outcomes for women and their children, especially during a recession, pointing to evidence from 2009 that showed the effectiveness of similar income support.

“Research shows that the added income from tax credits makes the biggest difference to the youngest and poorest children,” she said.

Similarly, a group of conservative scholars and leaders signed a letter to congressional leaders endorsing a temporary increase in the child tax credit and the EITC on the grounds that those provisions reduce poverty “while fostering some of our nation’s most critical investments: those that parents make for their children.”

Proposals for a temporary increase in the child tax credit predated the pandemic. The Economic Mobility Act of 2019 (H.R. 3300), introduced by Ways and Means Committee Chair Richard E. Neal, D-Mass., featured a temporarily fully refundable credit for 2019 and 2020, and it increased the credit for children under age 4 to $3,000.

The bill also proposed temporarily increasing the EITC for individuals with no qualifying children and making the child and dependent care tax credit fully refundable.

The child tax credit doesn’t reach all children in low-income households because parents or guardians must have at least $2,500 in earnings to be eligible. That makes it an imperfect remedy for lifting children out of poverty.

The revenue cost of eliminating the phase-in isn’t particularly large compared with increasing the credit amount, but is targeted to very-low-income families, for whom the concerns about young children in homes with insufficient resources are heightened because of the pandemic, said Elaine Maag of the Tax Policy Center.

Eliminating the phase-in also removes the work incentive built into the credit, because under current law, with each additional dollar of earnings, a taxpayer gets more credit, Maag explained. “A really good way out of poverty is a job that pays enough,” she said.

If there are enough jobs available, but the wages are a little too low to attract people into the workforce, then phasing in the credit is a way to encourage work, she said.

But the work incentive matters much less right now because of the precipitous shedding of jobs during the pandemic.

The HEROES Act proposed increasing the child tax credit for one year to $3,000 and $3,600 for children under 6. That’s similar to what Democrats floated in discussions before the passage of the TCJA in 2017.

The age-targeted change is meant to assist families when their children are youngest because that’s a critical time of development for children and also tends to correspond with a period in parents’ working lives when they make less.

“There’s a strong argument for making the child tax credit larger for families with young children,” Rachidi said, pointing to child care costs and research that shows a larger return on investment in the youngest children. She noted that the same targeted approach could be applied in the EITC context.

A potential problem in increasing the child tax credit or EITC for younger children is that it could introduce more friction when parents don’t live in the same household.

The child tax credit and EITC are designed so that only one parent is able to claim the full credit — there is no division of the credits even if children split their time between households.

If the credits are larger for younger children, the question of who claims a younger child could become a bigger problem for both taxpayers and the IRS, Rachidi said.

Changing the EITC or child tax credit could help direct more money to low-income families with children, but, as now formulated, both of those credits miss some taxpayers, Maag said. “They don’t touch people who are retired, and they don’t do a good job of helping workers without children at home,” she said.

Some of the people who don’t benefit are working parents who still provide substantial support for their children, but because they are noncustodial, they don’t benefit from the tax credits, she noted.

The child tax credit isn’t fully refundable because taxpayers whose federal income tax liability is smaller than the credit don’t receive the difference.

That results from the distribution of children — more children live in households that benefit from the regular child tax credit than from the refundable portion.

There have also been discussions about allowing taxpayers to receive advance payments of the credit, particularly in response to the pandemic. If adopted, that change could have a bigger impact for families with lower incomes.

“One of the ironies of the tax system is that if you’re high-income and qualify for the child tax credit, you can adjust your withholding so that essentially you get a little piece of the credit throughout the year, but if you’re low-income, you can’t do that, because you benefit from a refundable piece of the tax credit and you can’t get that money early,” Maag said.

Finding solutions to help families with children move out of poverty, weather the pandemic, and offset the costs of raising children that are also cost-effective and politically feasible isn’t easy.

But the bipartisan agreement about the child tax credit suggests that it’s a likely candidate for temporary relief efforts and possibly a longer-term expansion.

As some colleges struggle, there may be an opportunity for more aid. Here’s how to negotiate
Virgin Galactic delays next spaceflight test to May, with commercial service launch pushed to 2022
Texas, Mississippi lift Covid restrictions and mask mandates, despite CDC warnings
The $1.9 trillion stimulus bill would make health insurance more affordable for millions
FDA approves Johnson & Johnson’s single-shot Covid vaccine for emergency use