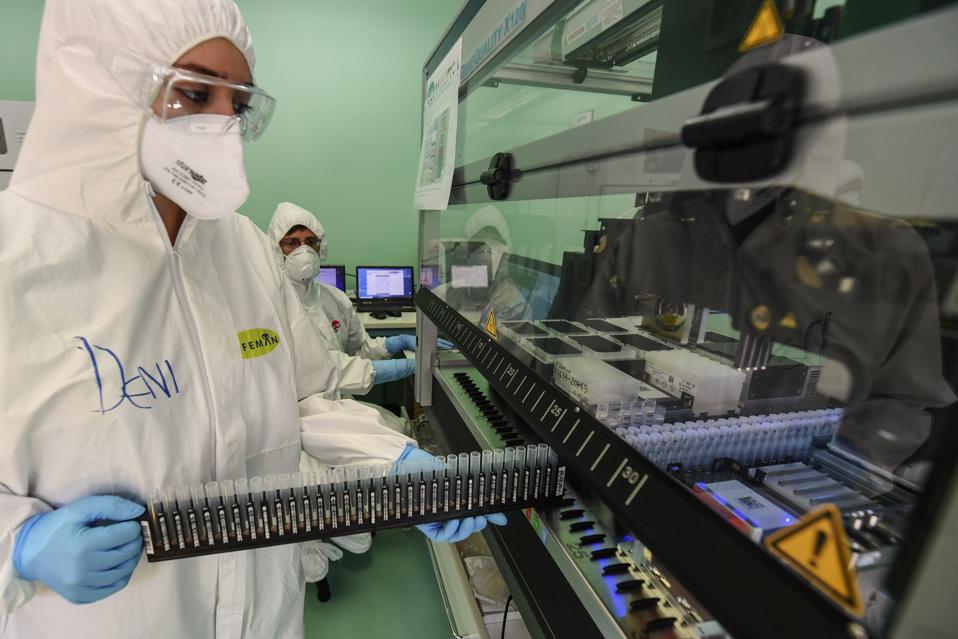 Daily rapid home testing may be what allows us to defeat the virus.

With 180,000 COVID US deaths, with some 50,000 new infecteds detected each day, with some 450,000 new presumed infecteds undetected each day, with 4 percent of the world’s population, but 22 percent of the world’s COVID deaths, with the perfect COVID superspreader — K-12 education — about to reopen, and with clear knowledge of asymptomatic spread, the CDC just advised waiting till we’re sick to get tested. Next week it will, presumably, advise waiting till we’re dead to get tested.

Admiral Brett P Giroir, our coronavirus testing czar, claimed this has nothing to do with politics. Here’s his statement:

“We all signed off on it, the docs, before it ever got to a place where the political leadership would have, you know, even seen it, and this document was approved by the task force by consensus,” Dr Giroir said. “There was no weight on the scales by the president or the vice president or Secretary Azar,” he added, referring to Alex M Azar II, the secretary of health and human services.

Dr Giroir failed to mention that the task force members, including himself, were largely hand picked by the White House and that the group has only a few members, including Dr Birx and Dr Fauci, who are clearly non-partisan. For his part, Dr Fauci was having an operation and was under anesthesia when the task force made their decision — a decision that will suppress the case count, help the president politically, but increase COVID-19 deaths.

As soon as he came to, Dr Fauci stated publicly, “I was under general anesthesia in the operating room and was not part of any discussion or deliberation regarding the new testing recommendations…I am concerned about the interpretation of these recommendations and worried it will give people the incorrect assumption that asymptomatic spread is not of great concern. In fact it is.”

The task force now includes “Dr” Scott Atlas, a highly political operative as indicated here. Dr Atlas, a radiologist, and Dr Girori, a pediatrician, should publicly debate Dr Fauci, the nation’s chief infectious disease expert, and try to justify their support for what public health officials around the country view as malpractice.

The administration, to its credit, has placed major financial bets on a vaccine. It should continue doing everything in its power to develop a safe and effective vaccine. This includes testing Chinese and Russian as well as western vaccines. Most people don’t know this, but it took the combination of US invention and Russian testing to develop the Polio vaccine. This time it may be the other way around. However, under the very best of circumstances, it will be another eight months before a vaccine is fully tested and given to enough Americans to produce herd immunity. Eight months at roughly 30,000 deaths per month will raise the US COVID death toll from 180,000 to 420,000.

There is another path forward that can end the virus in two months. It is daily rapid home testing based on new devices that could be quickly brought to market via a rapid home testing Manhattan Project. Two months back, I coauthored, with Harvard epidemiologist, Michael Mina, a New York Times
column calling for daily rapid home testing. So far, the FDA, with the White House’s apparent approval or acquiescence, has placed a mother lode of regulatory barriers — called the FDA Template — in the way of companies developing these tests. Whether they will be more flexible in approving these tests than their written regulations suggest remains to be seen. But companies should not have to be applying to the FDA for permission to save the country. The administration should be procuring every known rapid test technology, pull together every scientist and bio engineer who can design these tests in the equivalent of Los Alamos, and oversee the mass production of daily rapid home tests.

Such tests are essential not just for public health, but for reviving the economy. Imagine that we could take, say, three simple tests each day consisting of licking three pieces of paper. If any turned red, we’d go get a regular PCR test and if the PCR test were positive, we’d quarantine until our next PCR test turned negative. If our three tests were all negative, we could take a time-dated picture of the results and send it to our workplace or school to obtain entry or to a restaurant, airline, cruise boat, etc. to make a reservation. By using three or so independent rapid home tests, we can get the false negative rate down close to zero. We can also screen for who really needs the PCR test and relieve the PCR-testing system, which is now overwhelmed and may explain why the Task Force is now discouraging testing.

Time-stamped pictures of the negative test results, required as passports to the economy, would automatically incentivize universal daily testing. Using three or so such tests every day would ensure the virus was identified with extremely high precision in real time — when a person becomes infectious, i.e. has a high viral load. Anyone registering positive on even one of the three at-home tests would be immediately and quickly PCR-tested and, if also found positive, quarantine with their household members until everyone in the household tested negative via PCR. This quarantine would be supported with the delivery by state national guard members of food and medications.

Vice President Biden pushed for rapid testing in his convention speech. He needs to publicly call for a Manhattan Project to develop daily rapid home tests as well as follow a second track, namely weekly, household group testing, which could be rolled out literally in two weeks by yes, using the heretofore reliable Postal Service to deliver testing kits to every American, and permitting all research and academic labs, not just government-certified labs, to do PCR testing.

President Trump, if he’s smart, will beat Biden to the punch and announce his own Manhattan Projects for daily rapid home as well as weekly group testing. If he moves today, he can end COVID-19 by November 3.

Eldrige Cleaver’s famous saying, “If you’re not part of the solution, you’re part of the problem,” applies here in spades. The White House Task Force, the CDC, and the FDA are, for now, on balance, part of the problem. We can’t place all our best on a miracle vaccine. The only sure path is repeat, free testing of all Americans at their homes. This will let us find, capture, and kill the virus virtually overnight. Whichever candidate announces their Manhattan Project(s) first will likely end up winning the election.