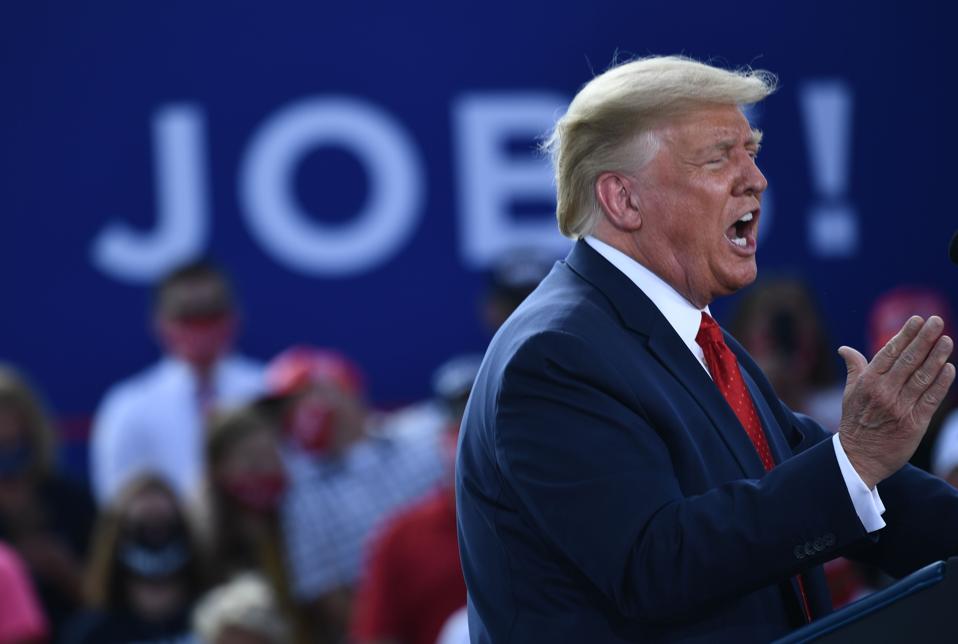 As the Republican Convention opens I expect President Trump will make the case he is best positioned to end the recession. According to Yale professor Ray Fair’s predictive voting model, the incumbent party usually wins if the economy does better in the year of the election. Unfortunately for the Republican party, Trump may have sunk his reelection because he ignored advice from professional economists.

Covid-19 and the Economy

In the most economically consequential moment in the last four years, the Trump administration went against the professional consensus among economists that there was no tradeoff between health and wealth. The regular University of Chicago Booth School of Business survey of economists found the professional consensus was to enter “severe lockdowns” and emerge slowly with testing and isolation of the sick. High-value, high-multiplier sectors with low contact intensively should open first and low-value, high-contact should open last.

Instead, eager to have the economy look vibrant, Trump encouraged states to let bars and restaurants and other miscellany open—all in low-multiplier sectors—causing his own demise as economies had to slow and schools had to remain closed. Economic models produce a roadmap of how to get as much economic activity with as little illness as possible. Work and school are dangerous if people are also engaging in non-work contact: going to bars, shopping without social distancing and masks, large group gatherings, etc. That’s why we saw a second wave of Covid-19 cases and a second wave of business closures. Trump behaved in direct opposition to the professional advice and he may pay the price.

The U.S. accounts for more than a fifth of the world’s recorded deaths from Covid-19 and exceeds most rich nations in unemployment. The U.S. paid out enhanced unemployment benefits but failed to devise policies that effectively preserved jobs. Countries like Germany, Japan and the U.K. are fighting the virus and the induced GDP coma without the same reduction in employment Americans have experienced. Germany’s unemployment rate is 4.2%, compared to 10.2% in the U.S.

The Trump administration’s inability to control the virus or devise a reopening plan means millions of children will not be attending school in the fall. By contrast, children in rich nations experiencing fewer daily Covid-19 case counts—Japan, Germany, Netherlands, Belgium, France—are going to school.

I agree with almost everything the Trump White House writes about the importance of opening school. In the White House’s own words: “The three months of closures between March and May 2020 may reduce future potential earnings of children by 2.3-3.7 percent … 5.6 million people will be unable to return to work for childcare reasons if schools do not reopen this year.” But because of the handling of the stimulus and the virus, most American children are staying home.

As Brookings Institution economist Harry Holzer concluded, after examining a broad range of health and economic indicators, the Trump administration’s response to the virus “generated much higher job losses than were necessary, as well as tens or hundreds of thousands of more lives lost.”

The Trump presidency’s banner economic policies have been the Tax Cuts and Jobs Act (TCJA) at the end of 2017 and the bilateral tariffs against China to save jobs and raise wages. Taken together, plan was a failure. The middle class got a tax cut but it was taken back by tariff-induced higher prices and the uncertainty caused by the trade wars.

Tariffs raise prices for imported goods and anything made with imported goods. Oxford Economics estimated the per-household cost, in form of tariff-driven price increases, ranged between about $500 and $1,000—an amount roughly equal to the average 2017 tax cut for middle-income households. Taxpayers also shouldered the costs of tariffs by paying off the farmers who lost Chinese demand. The U.S. Department of Agriculture estimated that aid payments constituted one-third of total farm income in 2019. Economic research finds that the tariffs have been “almost entirely borne by U.S. firms and consumers.”

Trump’s economic policies were sold on the notion that they would raise investment and pay. But new research shows that the tariffs will reduce investment of U.S. companies by 1.9 percentage points. The corporate tax cuts allowed more stock buybacks than investment. The bipartisan Congressional Budget Office found that “while evidence does indicate significant repurchases of shares, either from tax cuts or repatriated revenues, relatively little was directed to paying worker bonuses, which had been announced by some firms.” Meanwhile, the provisions in the TCJA meant to dissuade U.S. corporations from booking profits in tax havens appear to have done nothing.

Trump should have known tariffs would not produce jobs. His economist tried to tell him. In March 2018, Gary Cohn, chair of the National Economic Council, left the administration because Trump cancelled the meeting with manufactures who had to use the more expensive imported steel and aluminum. Cohn had arranged the meeting to discourage Trump from imposing the tariffs.

We have been over the post-Covid economy, so let’s round up Trump’s performance before the pandemic. The Trump administration oversaw the continuation of trends in employment, wages and GDP growth that started during the Obama administration. Trump’s best annual job growth was in 2018, during which 2.3 million jobs were created. The Obama administration matched that total in 2013 and 2016, and exceeded it in 2014 and 2015, years that saw cumulative job growth of 3 million and 2.7 million, respectively.

It is telling the U.S. has no regular economists as members of the Council of Economic Advisors. Not paying attention to virologists, economists or climate scientists may hurt Trump’s reelection.

Will Rising Bond Yields Crash Equities And The Fed?
Sensors Star In Mayo Clinic, Delos, KB Pilot Amid Healthier New Home Goldrush
‘Shark Tank’: Mark Cuban ‘looks up to’ the founder of Hopscotch–so he invested $550,000 in her app that teaches kids to code
Mansion Hunting: What $10 Million Buys In Hawaii, Hong Kong And Santa Barbara
Stocks just got some new competition from bonds as 10-year rate tops dividend yield