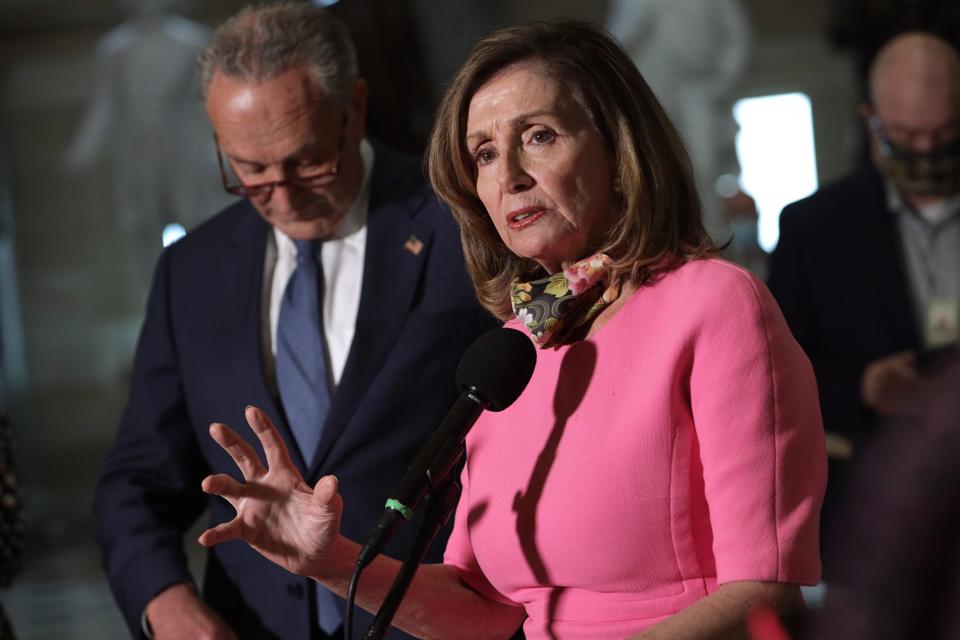 As Democrats grow wary of the slow movement in the discussions for the next stimulus package, House Speaker Nancy Pelosi (D-Calif.) has made it clear where she stands on the idea of passing smaller deals.

But Pelosi has declared she does not agree with the passing of the higher checks in a standalone bill, even if she supports the idea behind the legislation.

“I don’t think strategically it’s where we should go right now, because the Republicans would like to pass something like that and say forget about it,” Pelosi told PBS. “Forget about state and local [government funding], forget about our investments in stopping the virus, forget about other initiatives that feed the food insecure children in our country, vote by mail initiatives and the rest.”

There’s an inherent issue in the discussions between Democrats and Republicans because one side wants to pass a bill that will cover the entire swath of stimulus, while the other side wants piecemeal legislation.

The problem for the Democrats is that they believe if they pass a bill on unemployment benefits or on stimulus checks, in a vacuum, then they will lose any leverage to negotiate bills to help fund state and local governments, which have experienced significant shortfalls due to the COVID shutdowns. They also want to secure the US Postal Service, as the election nears, to ensure President Trump doesn’t use the agency to prevent the counting of mail-in votes.

Meanwhile, many Republicans have fought against the notion of spending more money to secure the economy, pointing to the stock market as an example of proof as more businesses open, the need for benefits will disappear. They’ve also cited concerns about the deficit. The US debt level officially surpassed the size of US GDP for the first time in June.

Discussions between Republicans and Democrats have moved very little over the past two weeks, since White House negotiators ended talks with Pelosi and Sen. Chuck Schumer (D-NY), due to a lack of progress. This led to the issuance of a number of executive orders by President Trump to prevent evictions, student loan defaults and provide some unemployment benefits, under a number of conditions. It also includes a payroll tax cut, which if implemented, business leaders have warned could cost taxpayers money next year.

Democrats argue that they’ve come down by over a $1 trillion from their original $3.5 trillion HEROES Act, which passed the House in May. But Republicans have refused to move much beyond their original goal of keeping any legislation near $1 trillion in total.

Instead, both sides seem to be debating the issue through press releases and announcements. Meanwhile, the number of unemployment claims rose to 1.1 million last week.

The Status Of Stimulus Checks

Republicans are reportedly considering a slimmer stimulus option that would remove direct checks to taxpayers from the bill.

While the new version of the GOP bill may cut the notion of stimulus checks, Democrats aren’t likely to agree with such a measure. It’s also a piece of the legislation the Trump supports. It’s the one area in the stimulus discussions that has shown some bipartisan backing. And Democrats have said no discussions can continue, until Republicans budge on their $1 trillion limit for the second package.

Senate Majority Leader Mitch McConnell (R-KY) believes that the passage of a $25 billion Postal Service bill, which Pelosi called House members back from recess to vote on this weekend, could open up discussions again for the next stimulus. Even in remarks to The Courier Journal, however, it’s his belief that Democrats will have to discuss “something smaller.”

This leaves the chance for stimulus checks in more unknown territory than early August, when it seemed like the one part of the legislation that had the most support.

It’s important to remember that the checks aren’t a sure thing. If you’re still awaiting your first stimulus check, make sure to report it to the IRS. While some issues remain unexplained by the agency, you want to make sure you have at least reported the problem.

New rules for self-employed and gig workers applying for PPP loans are out. Here’s what you need to know
Ask Larry: Will Social Security Widow’s Benefits Now Reduce My Retirement Benefit At 70?
Walmart says it will support U.S. manufacturers with $350 billion of added business
Nike’s North American head Ann Hebert resigns after report reveals ties to a sneaker resale biz
Suze Orman: Why ‘I love bitcoin’