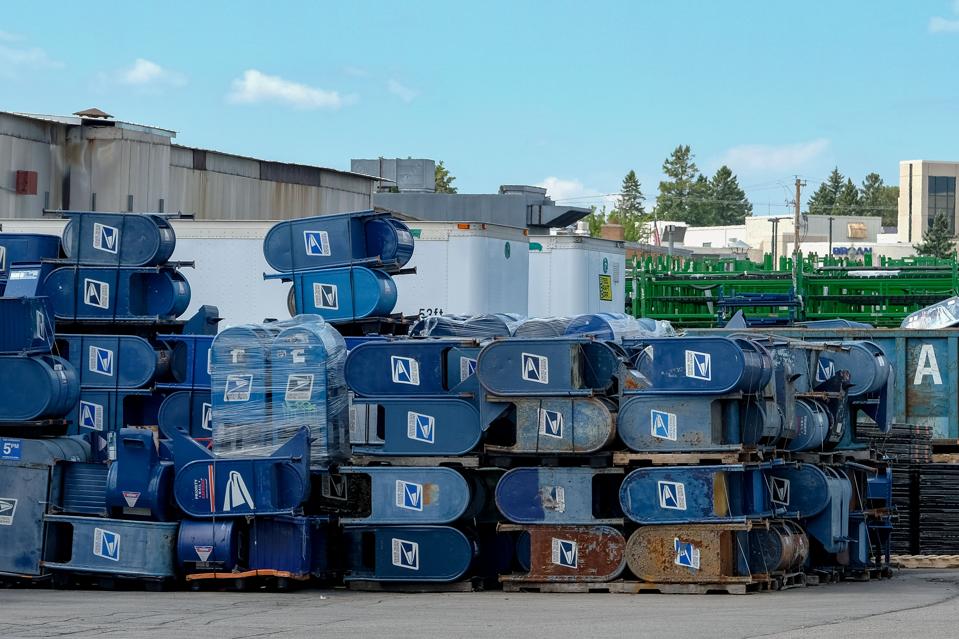 Yes, so far I’ve had “myths and facts” and “fact and fiction.” Let’s talk fairness (with a mix of restating prior comments and new information).

Covering costs by the price of postage? FAIR.

This should hardly need to be said, but, well, apparently it does: it is a well-established expectation that mail services are paid for by the prices the Post Office charges in postage.

This has been the case “officially” since 1971 with the reorganization that created the United States Postal Service. But this wasn’t new. When Ben Franklin was the postmaster for the colonies, even before independence, the colonial post office turned a profit. The Articles of Confederation gave Congress the power to establish and regulate the post office, “exacting such postage on the papers passing the same as may be requisite to defray the expenses of the said office.” After the Constitution was ratified, further legislation likewise mandated that the Post Office be self-supporting.

At the same time, in the late 19th century, Rural Free Delivery was implemented after an activist campaign by farmers who up until then had been obliged to travel to the nearest post office to collect their mail. This would set the Post Office up to run deficits, but this was hardly addressed as an ordinary expenditure suitable for the government to take on; it was hidden, unacknowledged, “almost invisible.”

Afterwards, in the years preceding the 1971 reorganization, the Post Office indeed ran deficits, in part because Congress was unwilling to raise rates as needed and otherwise interfered with the Post Office’s operation. But this was not shrugged off as “normal”; it was a problem to be solved, through multiple reform commissions — the Hoover commission of 1949 and the Kappel Commission of 1967, the recommendations of which led to the 1971 creation of the USPS. (To read this history wholly untainted by recent politics, scroll through Postal Service and the Public: A Case Study in Public Policy, a dissertation by M. Elliot Vittes from 1983, the source of the above quotations.)

Restricting the lines of business the Post Office can operate: UNFAIR-ish.

The USPS is a hybrid creature and at least some of its difficulties can be attributed to its status, expected to cover its costs but hamstrung by restrictions imposed by Congress. Some of these are similar to the sort of regulation imposed by states on utilities, which must file for rate approvals. But a credible case could be made for permitting the USPS to expand its services in ways that build on its strengths — using its excess capacity and widespread presence, empty space, competent clerks to provide other services. So, yes, I think the Post Office makes a credible case for a “Post Office Bank” (see here for more detail than you really want) and that advocates of USPS reform and restructuring ought to enable more independent action on that point by USPS management — but, at the same time, the risk is high that the politicians pushing for this have imagined that the Post Office can work that miracle of providing services “for free” or making loans to un-credit-worthy individuals at money-losing rates. If those who want to keep these restrictions in place make the case that the Post Office is too at-risk of politicians’ interference, I’d listen to their concerns carefully.

Yes, back in the days before the smartphone, before the internet, before (more or less) the Nintendo Game Boy was released, companies recorded on their books the amount that they spent, in cash, on health benefits for their retirees. Then, in 1990, the accounting statement number 106 was issued, “Employers’ Accounting for Postretirement Benefits Other Than Pensions.” (For comparison, the corresponding requirements for pensions, numbers 87 and 88, were issued in 1985.) This accounting changed required all corporations reporting under US GAAP principles to record the accrued liabilities for their future postretirement benefit promises as debt on their balance sheet, and the new accrual and year’s interest accrual, as expense on their profit and loss statement. When the new requirements went into effect, plans were able to amortize the new debt on their balance sheet over a period of 20 years (or the average remaining service or average life expectancy, to be precise about the requirements). Finally, for the USPS and for private-sector companies both, the liability calculation is based on benefits earned to date; if a worker is promised a given level of subsidy regardless of years of service, that benefit accrual is simply prorated so that the amount corresponding to already-worked years is included in the liability.

This means that, when looking at the USPS’s financial results and operating losses, they are on the same footing as any private company, in terms of their accounting requirements. When journalists and pundits write, as did, for example, David Sirota in “The Goodfellas Scheme to Destroy the Post Office,” that they face “an accounting mandate that no corporation or governmental entity faces,” they are deeply mistaken. Why? My best guess is that they don’t understand the difference between financial accounting and a business’s cash outlays.

Yes, I’ve been over this one before.

The USPS differs from private-sector employers in being required to fund its retiree healthcare obligations. Other companies are only required to advance-fund pensions, not medical benefits. But here’s the key distinction: private-sector companies can abandon their retiree medical promises at any point. These are not vested benefits, guaranteed by law, in the same way as is true for pensions.

The USPS? It would take an Act of Congress to remove or even modify these benefits. Hence, it’s entirely fair that the USPS be required to fund them.

The specific timeframe required of the Post Office? UNFAIR-ish.

No, I’m not talking about the claim that the Post Office must fund benefits 75 years in advance, for workers not yet born. (See my “myths and facts” debunking of this claim, or this Forbes article for a recent instance of this claim in action.)

I’m talking about the schedule imposed in 2006 for the build-up of the retiree healthcare fund — an aggressive schedule that foresaw the majority of the build-up occurring in 10 years. There were sound reasons for this aggressive schedule which meant that at the time it was entirely fair and not considered to be burdensome. But when circumstances changed, rather than the game of chicken in which the Post Office eventually simply abandoned making these contributions (which, incidentally, makes their claims that this obligation is to blame for cash flow woes, not credible), it would have been far more appropriate for Congress to revise the contribution schedule. After all, in the private sector, when ERISA mandated funded pensions in 1974, employers were given 40 years to fund their plans, and when, even now, plans become underfunded during recessions, they are frequently given “funding relief,” for example, to allow them to remedy funding deficiencies in 15 rather than the usual 7 years.

That being said, at this point in time, since they’re past the original 10 years, the 2006 legislation stipulates that the current deficit is remedied over a period of 40 years, which seems more than reasonable.

And, finally, some proposals to remedy this prefunding requirement go further than merely pausing further contributions; they call for allowing the USPS to spend down the fund build-up. This is not acceptable at all.

Restrictions that prevent the Post Office from making changes to its retiree medical benefit to reduce its cost? UNFAIR

Recall that the USPS cannot make changes to its retiree medical benefits without legislation. That’s because their retirees are a part of the Federal Employee Health Benefits system. The full particulars of how this plays out are complicated, but the long and short of it is that, in some circumstances, the Post Office covers costs that would be covered by Medicare, for a private-sector worker. For most federal workers, this doesn’t really matter; it’s all same overall budget, after all. But if costs are to be properly allocated to the USPS vs. the federal government, it does matter quite a bit.

There is also the thornier question of not merely cost allocation but relative generosity of benefits. As one might expect, mail carriers and their unions insist that generous retiree healthcare benefits are necessary because of the arduousness of the work — but, again, if this is truly the case, then those benefits should be funded.

And this means that retiree healthcare liability at the Post Office is much higher than at their private-sector competitors.

And, finally, restrictions that prevent the Post Office from investing in the same asset mix as other pension plans? PROBABLY ALSO UNFAIR.

The USPS is restricted in one way that seems patently unfair: it is required to invest in long-term U.S. treasury securities rather than the broader asset mix used by corporate pension plans. This lowers the fund’s investment returns.

Now, regular readers will recall that, for multiemployer plans and state and local plans, the expected return on assets is used in two ways, to project investment returns and to calculate the plan’s liabilities in the actuarial valuation. That’s not true with ordinary private-sector plans, and that’s not true with the USPS.

In the most recent survey data available for private-sector plans, for year-end 2018 financial reporting, the average discount rate used for liability calculation was 4.3%, based on corporate bonds, and the average assumption for investment earnings was 6.5%, based on the average asset portfolio.

For the Post Office, the discount rate used is 3.5%; this produces a higher liability than otherwise, and the 2019 year-end 10-K itself does the math to tell us that, had they used an alternate rate of 4.25%, the liability would have been 10% lower. As to the investment return, the report doesn’t calculate a single expected rate of return, but does report that the earnings in 2019 were at a rate of 2.7%. Compared to this, a 2017 Segal analysis “found that if the postal service invested retirees’ money in a standard 60-40 bond-stock fund, it would generate 53 percent higher returns than the current system over the next 20 years under a middle-range set of market conditions.” That’s not enough to solve the problem, but it would be a real help in the long term.

Now, to be sure, I have not been able to identify the reason for this restriction. Were there concerns that assets would be mismanaged, and that corrupt officials would interfere with professionals? Did Congress simply consider the fund analogous to the Social Security Trust Fund, and fail to consider the effects of this restriction on the fund’s funding status? Was this driven by very risk-averse individual legislators? Given the degree to which Congress loves a free lunch, or the appearance of one, I regret not knowing more.

And that’s that, for today. The story is complex and doesn’t lend it self to an easy villain, or an easy solution.

Private Equity Pays To Silence Investor-Whistleblowers Aware Of Fraud
Relativity Space unveils a reusable, 3D-printed rocket to compete with SpaceX’s Falcon 9
UK hikes corporation tax to 25% as pandemic supports hits £407 billion
These strategies can help the owners of the smallest businesses applying for PPP loans
A tale of two Europes? Covid infections fall for some but others fear a ‘third wave’