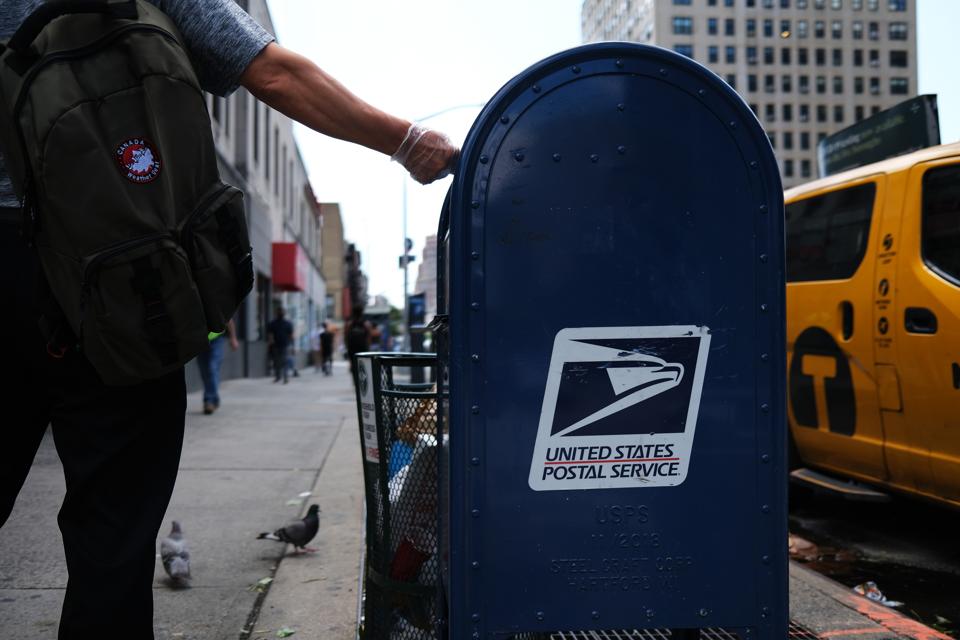 The House will cut short its August recess to address United States Postal Service. The Senate is gone, which means anything the House passes will sit doing nothing, and Donald Trump has turned the screws on a potential deal in part, as he’s admitted, over USPS funding and his claims of widespread fraud with mail-in voting.

(Let’s remember, by the way, that the odds of voting fraud occurring are so low that it’s more likely you’d be struck by lightning or attacked by a shark.)

Even though Trump’s allies sold the voter fraud conceit to him to explain his loss of the popular vote in 2016, the issues the USPS faces are far older and deeper than the current tsuris.

Ultimately, much of it comes down to a scheme that was a subsidy for the Department of Defense—responsible, by the way, for 18% of all on-budget spending in the 2019 fiscal year. It’s only that low if you include Social Security and Medicare, which are mandatory. It was 44% of the 2020 federal discretionary budget.

This sounds like some screwy conspiracy theory. Except, when you look at the history and basic business math, it’s hard to argue with.

To understand the postal system’s dire financial straits takes some history. A major strike by postal workers in 1970 over wages and benefits, even though the law didn’t allow this, started a series of monetary dominoes.

Congress turned the Post Office Department into the U.S. Postal Service, to run as a self-supporting business. But politicians hamstrung the agency.

The new USPS still had to provide uniform service and pricing. It couldn’t move beyond letter and package delivery, although at one point there was a postal banking system that helped low-income and rural people. If banks couldn’t be bothered with them, postal banking, with branches everywhere, was available.

Even this was minor, though, in comparison to the treatment by elected officials who saddled the agency with “debt and financial disadvantage,” according to an email exchange I had with Philip F. Rubio, a former USPS letter carrier and now a professor of history at North Carolina A&T State University.

The big example is pre-funding pensions, something that many have heard of at this point. In 2006, a Republican-dominated Congress passed a bill, signed by George W. Bush, that required the USPS to pre-fund, over a ten-year period, pensions for 75 years in advance.

If you’re ever dealt with business finance, this is ludicrous. Pension funds get invested to grow over time so they can meet obligations. You don’t require full funding in advance, including pensions for people who haven’t been born, let alone hired, unless you want to make it difficult to run the organization. When you were, say, 25, would you expect in ten years to have put aside full retirement savings for yourself and your children and maybe even grandchildren?

The pre-funding is the source of most of the deficits—about $110 billion as a direct result, according to the office of Rep. Peter DeFazio (D-Ore).

But atop the injury is insult.

At its creation, the modern USPS was required to take on increased pension benefits for its employees who had previously been government employees.

Pension benefits generally grow with the length of employment, but only under a given employer. If you were lucky enough these days to have a real pension and moved from Company A to Company B, the pension benefits at B wouldn’t be a continuation of those at A. Instead, you’d start over.

But the new USPS became responsible for the ongoing increased pension benefits. It was a way to offload big expenses from federal responsibility to the new agency.

Given that the postal service had been a major employer of veterans, that effectively means transferring a significant financial burden from the Department of Defense to the USPS, according to Rubio.

“[T]he USPS was on the hook for the whole pension of any veteran who worked for it” because of the 2003 Pension Reform Act, Rubio wrote. That means all pension obligations including those from when the person was in the military and not a postal worker.

Then there’s one additional insult. According to Rubio: “Funds are instead being diverted [by Congress] to help pay down the national debt.” The federal government takes the pre-funding and then spends it elsewhere, because it can always cover pension obligations down the line.

The whole result is a USPS that can’t meet its artificial obligations and so is constantly on the look for federal loans to make up the amounts, taken by the federal government for pension funds for people who don’t exist and then spent elsewhere.

What the USPS needs is not a bailout but rationale operating conditions and a chance to do its part in the fall elections.

Home Sweet Tax Home
Wall Street clearing firm proposes 1-day trade settlement after Robinhood controversy
Ex-TD Ameritrade CEO says it’s never been easier for retail investors to compete with Wall Street pros
Why COVID-19 Is Driving Up The Cost Of Healthcare In Retirement And What You Can Do Now To Prepare
$400 unemployment boost: Republicans revive anxiety over the effect on jobs