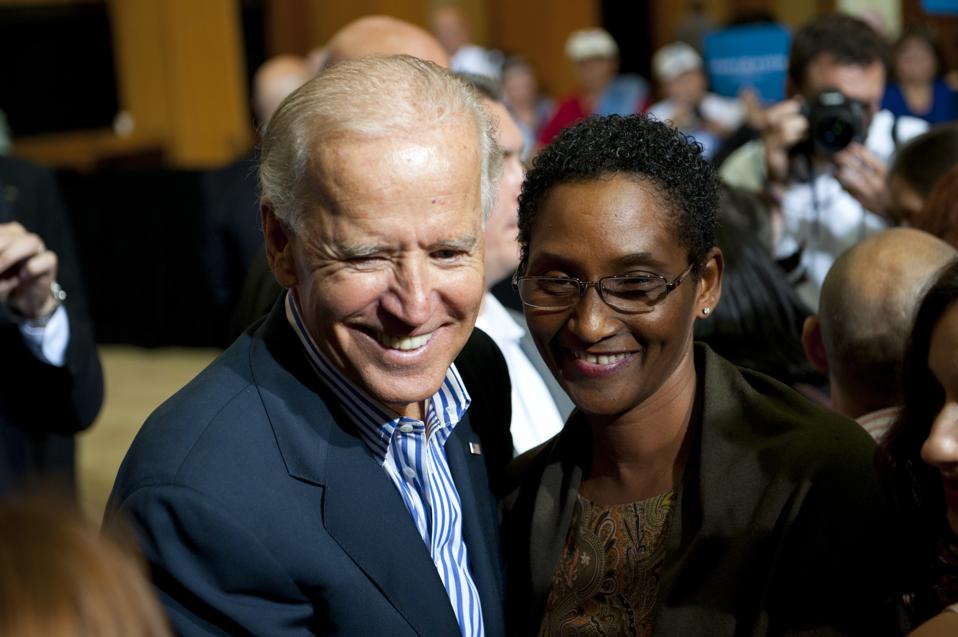 We have an unfolding retirement emergency on our hands. And the COVID-19 recession just made it worse. My research team and I predict over 4 million older workers will be pushed out of the labor force by October and most will have inadequate pensions and must claim Social Security too early.

I compared the plans of both parties to see what they would do to solve the retirement crisis. I used President’s Trump’s recent statement on Social Security, the platforms of the Republican and Democratic National Committees, and the section in the Biden’s Task Force recommendation that refers to retirement to see how each party deals with Social Security, inadequate 401(k), pensions, and IRAs;  the top heavy $250 B tax breaks; how to help people who do low-paid and unpaid care work secure their retirement futures; and fraudulent money management.

The difference between the Republicans and Democrats are clear and well-defined. The Republicans merely adopted their 2016 language on Social Security and have no language about the employer pension system.  The Democrats have a full-bodied set of principles and policy ideas.

The Republicans want to shrink the program and the Democrats want to expand it.

The President’s position on Social Security is being revealed. On August 12 President Trump  said, “At the end of the year, on the assumption that I win, I’m going to terminate the payroll tax.. We’ll be paying into Social Security through the general fund.” He implies a second Trump administration would propose a radical program change by replacing Social Security’s dedicated payroll-based stream of revenue with an optional appropriation from Congress every year. There is no doubt that political process would make Social Security revenue less stable.

The Republican 2016 and now, 2020, platform language on Social Security implies they do not plan to bring new revenue into the system which will mean a 25% cut in benefits in the next ten years or so. They use these phrases” “preserve Social Security,” ”preserve and modernize”  and “we oppose tax increases.” Republicans continue to put deficit reduction ahead of Social Security.

Biden will likely propose new revenue sources for the program by lifting the earnings cap on the tax base and more. Candidate Pete Buttigieg had a detailed way to pay for Social Security so benefits would not be cut.

The Democratic National Platform and the Biden campaign “Unity” document make similar promises with respect to Social Security: increase the minimum benefit – probably in line with existing House legislation, led by Rep. John Larsen (D. Conn) which includes a minimum of 125% of the poverty line, boost benefits for surviving spouses, eliminate the WEP/GPO a complex rule that reduces benefits for people who worked in the Government and private sector jobs. The Democrats explicitly reject means-testing.

The campaign advocates a longevity boost – to increase benefits for recipients who received benefits for over 20 years, who often face rising costs and more poverty. A part fix for people over 80 needing more inflation protection is to index the benefits with a more generous index reflecting the costs of living faced by the elderly – the Biden campaign advocates adopting the CPI-E.

The language is not specific on how to help unpaid caregivers but Elizabeth Warren’s campaign did the most work on this issue.

Even when the economy was doing well at the end of 2019; only 36% of workers age 25-64 had a retirement plan at work (a fall in coverage rates from 41% in 2015.) This means these retirees will only have Social security to rely on, the median benefit is a bit over $1,400 and the maximum benefit to people who earned the maximum earnings their entire career ($132,900 in 2019) and got the delayed retirement credit (people who delay claiming get the credit up to age 70), which is fewer than 1% of beneficiaries,  is just over $3300.

Everyone needs to supplement Social Security, even lower income workers. The Democrat’s language is not detailed, but it is clear. The Biden task force and Democratic National Committee want to make it easier to save for retirement. Biden calls for “widespread adoption of workplace savings plans,” promises to “offer tax credits to small businesses to offset much of the costs” and pledges that, “Under Biden’s plan, almost all workers without a pension or 401(k)-type plan will have access to an “automatic 401(k),” which provides the opportunity to easily save for retirement at work – putting millions of middle-class families in the path to a secure retirement.”

State versions of the “automatic 401(k)” require employers to forward onto a state agency a given percentage of their employees’ wages, to be invested in an IRA managed by a vendor chosen by the state, with the opportunity to opt-out. This proposal is better than nothing, but I worry opt-out plans are still voluntary and only a mandate, like Social Security, will provide effective coverage.

Biden will eliminate the Windfall Elimination provision and the Government Pension Offset, WEP/GPO which penalize the Social Security benefits of many public workers. The Democrats vow to shore up multiemployer plans, perhaps similar to the House Democrats’ HEROES Act plan and promise to back some federal approach to the public pension funding crises, which the Republicans have already said they would oppose and instead want states to file for bankruptcy.

The Republicans have no plans for employer retirement plans.

The Democrats seem ready to take a promising big step in helping all people save for retirement by vowing to “equalize the network of retirement saving tax breaks” which refers to the longstanding problem that the federal and state tax breaks favor the highest paid who — because of their higher rate of tax and more income — get over 70% of the federal aid. I am hoping for a flat refundable tax credit that everyone, regardless of income receives. Over 68 million more American workers would have something in their account if the Treasury would provide a universal match. As the Brookings Institution, including Bill Gale, and others have argued, now only the well-off get substantial help saving for retirement in the form of a tax break . This would mean the government provides a  savings match, which they do anyway, but just for higher income people.

Equalizing the tax breaks by switching from tax-deferral to a federal match is likely a win -win. Middle class and lower-income workers will get retirement savings, many for the first time, and higher-income will most likely maintain savings for retirement.

The Democratic Platform also supports amending federal bankruptcy laws to protect workers’ earned pensions from being taken away by employers going through bankruptcy.

The Republicans have no plans for reforming the retirement savings tax break.

Most scholars agree that retail money management for retirement funds are inefficient and too high and that the government helps pay for profits to money managers through the tax break. (Professors Mattai Landoni and Stephen Zeldes found the tax deferral actually increases demand for asset management services by $3 trillion, causing the government to pay $20.7 billion in corresponding annual fees for high income people’s asset management services.)

The Obama administration tried to correct brokers acting to seek the highest profits for themselves when providing retirement advice,  but the Trump administration overturned the regulations that barred financial advisors to prioritize their self-interest over their clients. The Democrats would reinstate the fiduciary rule.

The bottom line is that Congress and the President have a lot of power to help workers secure their old age with sensible adjustments to retirement savings regulations and protections, reform tax breaks so they don’t just benefit high income workers and expanding Social Security. Retirement security is going to get even rougher to manage as the corona-virus and the recession are forcing older workers out of the labor force and causing them to draw down savings and claim Social Security too soon.

Kevin O’Leary: I make ‘a lot’ of money each month from my Cameo side hustle
Op-ed: Here’s the key decision that paved the way for development of Covid vaccines
China’s aging population is a bigger challenge than its ‘one-child’ policy, economists say
Here’s How Much These Popular Upgrades To Your Home Will Cost
Should Your Life Insurance Be In An Irrevocable Trust?