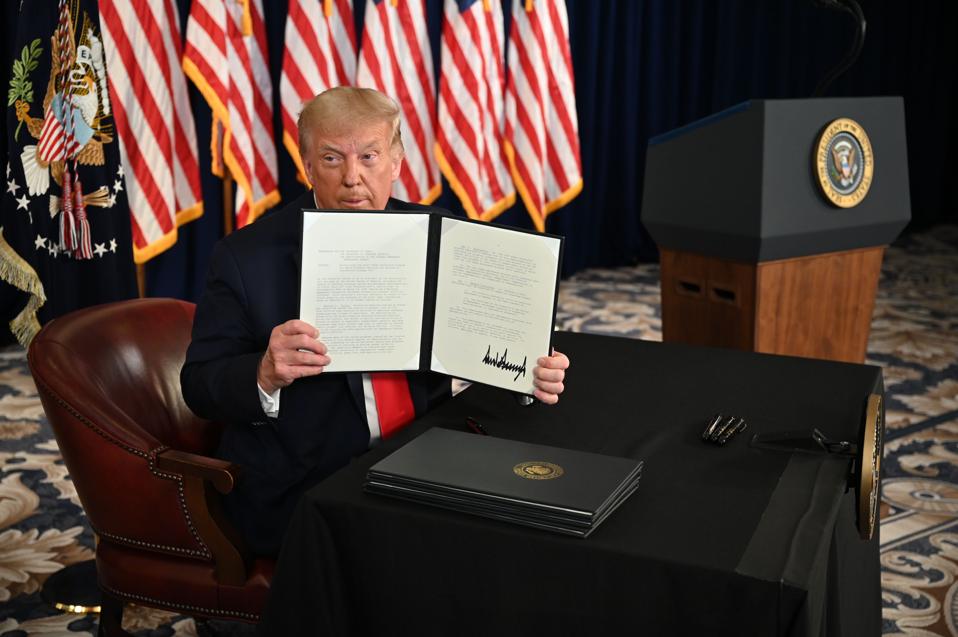 The economy faces a major output gap, and executive orders can’t generate enough funding to address it. Only significant Congressional spending can provide the necessary level of funds.

The legal critiques of President Trump’s executive orders for Covid economic relief are obscuring a critical economic issue.  Our economy faces a huge gap in output and jobs, one that can’t be filled by executive orders.  Only Congressional spending can do the job.

When Congress didn’t enact a new relief package last week, President Trump issued executive orders designed to “get Americans the relief they need.”  But legality aside, the orders just aren’t big enough to give a significant boost to a still-fragile economy.

We are facing a major economic gap, both short and longer-term.  The economy is partially recovering from the depths of April, the worst monthly job loss since the Great Depression of the 1930s; in the last two months, we’ve added 6.6 million new jobs.

But that welcome gain must be viewed against how much more is needed to repair the pandemic recession’s damage.  We lost 20.1 million jobs in April alone, and even with the recent job gains, we are still down 12.9 million jobs from February’s high point.  So the job gap is still more than 50% of this year’s losses.

The long-term damage caused by job losses and other factors is shown in what economists call the “output gap”—a measure of what the economy could produce at full employment and capacity utilization compared to its actual performance.  And this measure shows how dire our economic situation remains.

For the second quarter of this year, we have a 1.4 trillion dollar output gap, 10.4% of potential GDP and the largest ever measured in the 71 years it’s been calculated.  Although economic growth in the latter half of 2020 should narrow the gap somewhat, the Congressional Budget Office (CBO) predicts the gap will still be 6.4% for calendar year 2020.

Analysts note “it took 10 years to catch up on the output lost in 2008” due to the Great Recession.  Output gaps represent not only lost incomes, but foregone investment in productive capacity for the future, so a larger gap now means a slower recovery and lower standard of living, and less productive capacity for future growth.

In the face of these numbers, Trump’s executive orders look rather puny.  Forbes contributor Simon Moorenotes that this spring’s CARES Act “provided an absolute boost to GDP of approximately 20% over a six month period,” but Trump’s orders at best would be “only a tenth as large, closer to 2% over the remainder of the year.”

Up until now, the federal government has put about $3.7 trillion in spending into the economy.  That spending has kept the economy from being even worse.  But many experts now see the economy stalling out as Covid cases continue to rise, with no vaccine in sight.

So Trump’s executive orders are simply not up to the economic problem, even if they survive legal challenges.  And they may not even go into effect.  His state unemployment benefit proposal for an additional $400 (instead of $600) weekly benefit requires states to provide 25% of the funds, at a time when many state budgets are underwater due to the recession.  When asked how governors can participate given their own dire budget problems, Trump said “if they don’t they don’t; that’s up to them.”

But right now all of those channels have run dry, and the executive orders cannot refill them, economically and perhaps legally.  Only Congressional spending can do the job.

Stocks making the biggest moves in the premarket: Foot Locker, Beyond Meat, DoorDash & more
Sotheby’s International Realty’s President And CEO Phillip White Talks International Expansion As South Korea Joins The Brand
An activist with value approach takes the next step to turn around a food and beverage manufacturer
Stocks making the biggest moves after the bell: Beyond Meat, Etsy, Virgin Galactic & more
Rocket Lab CEO says SPAC deal is ‘a supercharger’ for growth and adds ability to launch astronauts