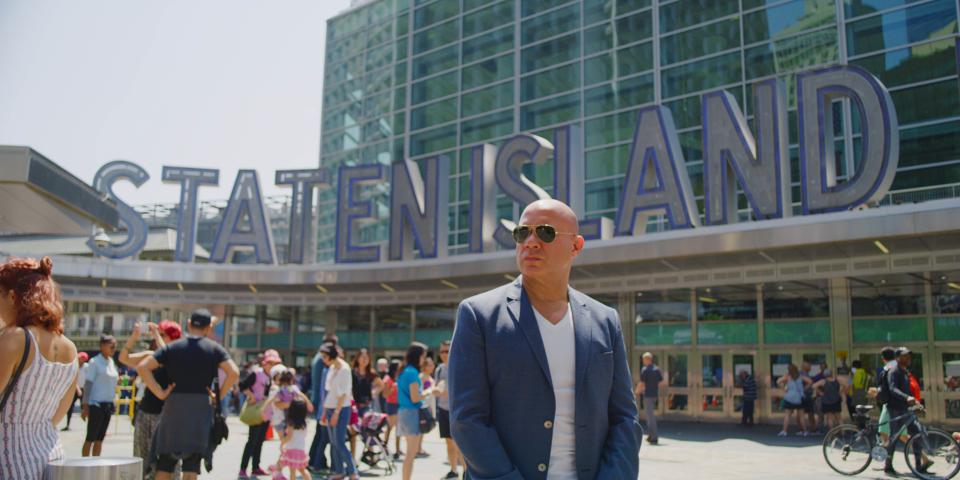 Eric Eremtia is best known from several HGTV shows including Love It Or List It and Brother Vs Brother, as the stereotypical New York contractor you wouldn’t want to fight with, especially when he has power tools in his hands. But, Eremita recently made headlines for being in the fight of his life against COVID-19.

Earlier this year, he spent three weeks in a New York City hospital, two of which he was on a ventilator. While he’s incredibly grateful to be alive, he isn’t resting on his laurels anytime soon. Between his family, various businesses including a clothing line called Thirteen, and selling a new television show, the reality star couldn’t be busier right now.

There’s no denying that Eremita was an integral part of two HGTV shows, even saying everyone at the network was “like my family.”

Still, in 2019 he realized he was ready to move onto something else. “The renovations were great. The people were great. But, I thought it was time for my own thing,” he tells me.

Eremita decided to create his own reality show, called Homeboys, which co-stars his apprentice and friend Conrad Layton. “He’s got savviness and he’s younger than I am. So, it’s me showing him the ropes, which he’s very eager to learn.”

The show follows the two men as they renovate homes of people who live in various parts of the tri-state area (New York, New Jersey, and Connecticut), not far from where the Staten Island native currently resides. While the homeowners love their neighborhoods, they don’t necessarily have the same sentiment about their living spaces. The result is more about loving than listing.

While Homeboys hasn’t found a home quite yet, Eremita has been in talks with various networks. No matter what happens, he is incredibly proud of this project. “It’s showing unity and positivity. We’re going to do some great renovations and make you laugh. There’s no doom and gloom.”

After all, Eremita and his family survived one of the most doom and gloom scenarios anyone can experience right now. Even after waking up and completing treatment for COVID-19, his doctors didn’t have high hopes for a complete recovery. “They told me I would have a hard time walking again, but I proved them wrong. And I proved the whole situation wrong. The hospital actually calls me the miracle,” he says.

While almost entirely recovered, the deeply religious Eremita is a changed man who has gained a new appreciation for everything he has. “Don’t sweat the small stuff. That’s all I’m going to say. And by that I mean without health, you have nothing. You can get the best doctors in the world, but that can’t buy you health. When you go through something as traumatic as that, you appreciate everything around you. You appreciate the leaves on the trees and the dog barking. You appreciate it all.”

Eremita feels incredibly fortunate especially because many people haven’t been as lucky, in particular Broadway star Nick Cordero and his wife, Amanda Kloots. “I put a memorial up for her husband because I just felt that I had to. And there are so many people, Tom Hanks, and his family. But forget about celebrities, what about people all around the world that were affected by this?”

He is currently trying to organize a fundraiser for families impacted by coronavirus, hoping that other celebrities will get on board with him.

The contractor also knows the pandemic has changed how so many people feel about the places they live. While health is the most important thing, Eremita acknowledges that everyone is sick of staying home and looking at “the same four walls.”

But when it comes to major renovations, he suggests proceeding with caution. While HGTV has a way of making DIY projects look easy, reality television isn’t real life. Eremita cautions homeowners from getting in over their heads. “They start ripping down walls, they realize, I need an electrician. I need a plumber. I didn’t know there were pipes in the wall. I didn’t know there were heavy duty beams sitting above there.”

Eremita says its perfectly fine for homeowners to paint, install trim or potentially try their hands at tile work, but he discourages amateurs from attempting any project that could permanently damage their homes or worse. “If you don’t know anything about electric work, you can really cause fires, shorts, and things of that nature.”

Plumbing is another project that can cause major damage when installed improperly. While changing a faucet or showerhead is something many people can do on their own, swapping out a water tank for example requires professional help. “Water issues do not go away. So, don’t try to attempt plumbing, if you don’t know what you’re doing,” he says.

Another seemingly minor DIY project he discourages is installing wallpaper. It’s far more complicated than it looks. “Wallpaper is not an easy thing. And the more expensive the wallpaper, the more you really don’t want to mess it up.”

The Future Of Home Design

While the past years have seen a variety of shifts in terms of style, there’s one major trend that Eremita says isn’t going away any time soon. The open concept home is here to stay with the formal living room on its way out. He doesn’t even have one in his own home. “When we said we’re going to build our dream home, we didn’t want a living room. So the big open concept goes from the kitchen, into the eating area, into the family room and den. It’s open from end to end,” he says.

But large open kitchens are here to stay. “It’s the heart of the home. It will always be the heart of the home,” he says. Considering most people are spending more time with family these days, it’s easy to understand why. After all, no one has a better appreciation for his family right now than Eremita does.