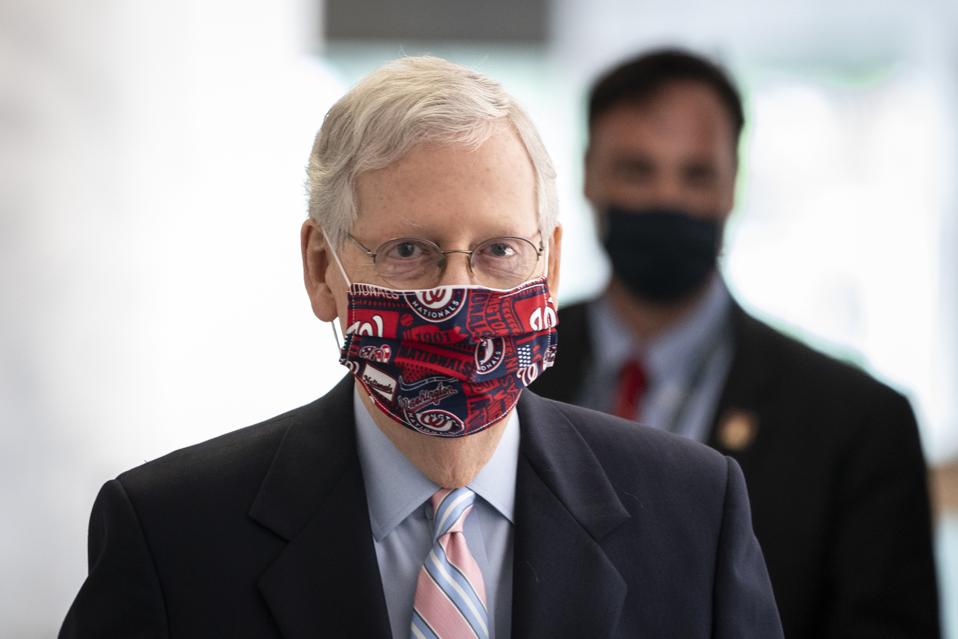 Looking forward to the great partisan battle over the next COVID-19 relief bill? You may be disappointed. Nancy Pelosi already has won.

True, the $1 trillion Senate GOP plan is just one-third the size of the $3 trillion HEROES Act, the stimulus bill passed by the House back in May. But in broad strokes, the plan offered by Senate Majority Leader Mitch McConnell (R-KY) and President Trump largely mimics the House version. Democrats and Republicans will struggle over important details, but the battle will be fought almost entirely on the Democrats’ ground.

Like the House bill, the Senate GOP version includes more federal unemployment benefits, more direct payments to individuals, more assistance to small businesses, and a larger employer tax credit to encourage firms to retain or rehire workers. The House initiatives are enormous in size and scope. The Senate GOP version is merely big.

The one exception: The House would provide about $1 trillion in aid to state and local governments to help offset their increased costs and falling revenues caused by the pandemic. The Senate GOP bill includes no new money for them.

Still, in most respects (even state and local aid), that leaves lawmakers with a split-the-difference negotiation. For instance, the over/under on assistance to subnational governments: $500 billion.

Sure, there are some issues where the two chambers are deeply split. McConnell’s bill would protect firms and schools from private lawsuits if an employer, customer, or student contracts COVID-19. The Senate GOP bill also includes a couple of Trump demands, including full deductibility of business meals and entertainment and, oddly, $1.8 billion to rebuild the crumbling FBI building on its current site—a block away and across the street from Trump’s downtown Washington hotel.

McConnell also would add some new business tax breaks while the House would roll back some in the Coronavirus Aid, Relief, and Economic Security (CARES) Act. But in the scheme of things, those changes are relatively small. Here’s a look at some of the details:

Unemployment benefits. The House would extend through January the $600 in extra weekly federal unemployment benefits that were included in the CARES Act. McConnell also would extend the added federal relief through January, but in a more complex way. He would reduce the new federal benefit to $200 through September. After that, laid-off workers would be eligible for state and federal benefits equal to no more than 70 percent of their former pay. This would make it even more difficult for already overburdened state unemployment systems to pay benefits.

Stimulus payments. The House would expand and extend the CARES Act economic impact payments to $1,200 per individual for adults and up to three children per family. The Senate plan would pay $1,200 for each adult and, like the CARES Act, $500 for each child. Both bills would keep CARES Act’s phase-out ranges (starting at $75,000 for singles and $150,000 for joint filers).

Employee retention tax credits. These subsidies would go to firms that hire or retain workers during the pandemic. The CARES Act tax credit covered only half of wages up to $10,000. The House would cover 80 percent of annual qualified wages up to $45,000. The Senate GOP would expand the subsidy to 65% of up to $30,000 in annual wages. In a change from the CARES Act, both bills would allow employers to claim the credit even if they also accepted money from the Paycheck Protection Program. These changes would make the credit more widely available and more attractive to firms.

State and local aid. The House would provide about $1 trillion in federal assistance. McConnell proposes no new aid but would give states more flexibility in spending any unused CARES Act money.

Individual income tax provisions: The House would increase the earned income tax credit, child tax credit, and child and dependent care tax credit for 2020. It would repeal the cap on the state and local tax deduction for 2020 and 2021. None of these provisions are in McConnell’s bill.

Business tax provisions: The House would limit a CARES Act provision that allows businesses to use current and recent tax losses to lower prior year taxes. McConnell would retain those provisions. The Senate GOP bill also would create a new refundable payroll tax credit equal to 50 percent of an employer’s “qualified employee protection expenses,” such as COVID-19 protective personal equipment, cleaning supplies, and some workplace redesign. This credit is not in the House bill.

Congress and Trump probably could split the difference in the major provisions in about two days. But there first will be some grandstanding on both sides and perhaps a few real battles over relatively minor provisions, which could delay matters.

No matter the timing, in the end the White House and McConnell understand that without massive additional federal assistance, the teetering COVID-19 economy could collapse just a few months before the November elections.

They also know that McConnell does not have enough GOP votes to pass his own plan, which the Senate never will vote on. He’ll need Democratic support to enact a new stimulus.

Failure to pass a relief bill would be catastrophic for the reelection chances of Trump and the growing list of endangered Senate Republicans. That’s why the president and the Senate GOP will capitulate on the big stuff. In effect, they already have.

IBM is one of 20 companies joining The Climate Pledge, a commitment to reduce carbon emissions started by Amazon and Jeff Bezos
Dr. Fauci says winter storm in Texas is a ‘significant’ problem for Covid vaccine distribution
Op-ed: You’ve been asked to invest in a private venture. Here’s when to say ‘yes’ and when to walk away
The “Hey Hey Just Don’t Pay” Tax Strategy
Watch the first ever video of NASA landing a rover on Mars