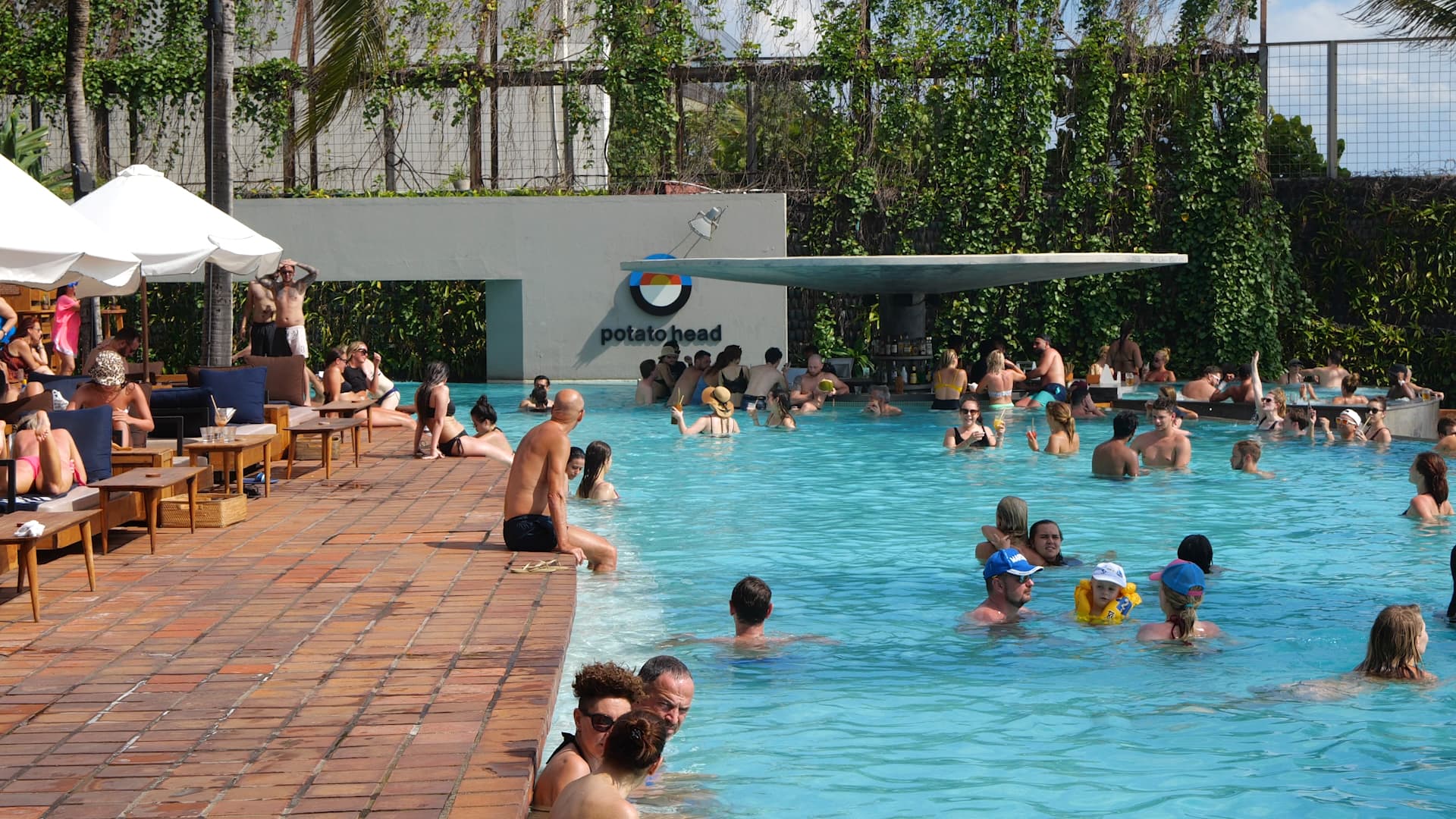 When you arrive at Potato Head Beach Club’s security checkpoint in Bali, Indonesia, guests are screened for the usual contraband such as weapons or explosives and one other thing: plastic bottles.

Single-use plastic is banned from the resort, which means, guests often turn in their water bottles. It’s all part of the experience, though, which is designed to get customers thinking about their environmental impact.

Potato Head, which is temporarily closed due to the coronavirus pandemic, was ranked among the most sustainable venues in the hospitality industry for its green initiatives, winning the Most Sustainable Bar Award by Asia’s 50 Best Bars in 2018.

Every element across the resort is thought-out for the sake of sustainability and minimizing waste. For instance, the back of menus are made out of tire and flip flops. Soap dispensers and tissue boxes are made from styrofoam, bottle caps, limestone and oyster shells. Candle wax is made exclusively from used cooking oil and glass candle holders are made from its used wine bottles. At the entrance of the beach club is an art installation of 5,000 flip flops collected along the shores of Bali beaches.

5,000 flip flops from Bali beaches have been turned into an art installation at Potato Head Beach Club

Potato Head says in its effort to be sustainable, it also saves money on everyday costs.

“The consumer today demands authenticity and they demand sustainable solutions,” Simon J. Pestridge, chief experience officer of Potato Head Family told CNBC.  “If you’re not focused on it, we don’t think you’ll be in business in a few years.”

“The younger generation that have disposable income for the first time, if you don’t offer them solutions, why would they come?” he added.

Potato Head said of all the waste it generates, only 3% ends up in landfill, primarily paper tissues, waste from restrooms and cigarette butts.

Its restaurants partner with pig farms on the island by donating food waste, such as banana peels, for the pigs to eat. In return, its restaurants receive discounts on its pork.

“We have the right to refuse here if things are wrapped in plastic,” the resort’s head of food and beverage Rushi Krishna said of its vendors, such as those selling fruits and vegetables.

In 2017, Bali declared a ‘garbage emergency’

Indonesia, which consists of more than 17,000 islands , is the second biggest polluter of plastic waste in the ocean behind China, according to a 2015 report.

In 2017, a garbage emergency was declared as swathes of Bali’s beaches were covered in trash. Some local politicians have declared bans on single-use plastic, however, enforcing it has been challenging.

Indonesia has now pledged to reduce ocean plastics by 70% by 2025 and Bali will be the centerpiece of its efforts.

A cargo terminal in Hong Kong.

Can big city hotels and restaurants reduce their waste?

Despite Potato Head achieving high sustainability rates, it has two sister restaurants in Singapore and Hong Kong, where it admits, supplies are more commonly mass produced and logistics are streamlined.

“It’s probably harder in those cities right now, but it doesn’t mean the solutions aren’t there,” Pestridge said. “We just believe that because our footprint is so big here in Bali, we have to get it right here and then transfer what we can to the other cities.”

Streamlined logistics could give also global conglomerates less incentive to reduce waste. “For the big chains and the big groups, they have the ability to make big impact,” Pestridge said. “But it’s way harder because their supply chains are so complex.”

The hospitality industry has been one of the early adopters of sustainability, encouraging guests to reuse towels and recycling of its soap bars. The world’s largest hotel chain Marriott International said it plans to phase out single-use toiletries, the equivalent of about 500 million small bottles by the end of 2020.

An artist converts glass waste into art pieces at the Soneva Fushi resort in The Maldives.

‘Ecology is economy’ at this resort in The Maldives

The Maldives, a recently reopened tourist hotspot, said it will ban all single-use plastics by 2025.

Those initiatives have been a long time coming for Soneva Resorts CEO Sonu Shivdasani, who said he banned plastic bottles in 2008 at Soneva Fushi, which led to financial savings.

“Ecology is economy in most cases,” he told CNBC. “Hotels normally spend 20% of their water revenues on buying branded water. We stopped that. We bottled on site and we saved 18% of our water revenues.”

Even the old alcohol bottles aren’t thrown out or recycled in a typical fashion, but instead used in an onsite art glass factory where specialized artists visit to convert waste into art pieces.

Shivdasani claims his resorts are some of the few in the world to charge a mandatory 2% carbon tax to every room bill.  Those revenues are used for carbon-offset projects such as planting trees in Thailand or building windmills in India.

“The carbon levy and the saving of water revenues have been the result of making changes, changes the way we do business, which has not affected our profitability, which has raised a lot of capital for good causes,” Shivdasani said.

“Governments can create the context, but companies need to make the change,” he said.