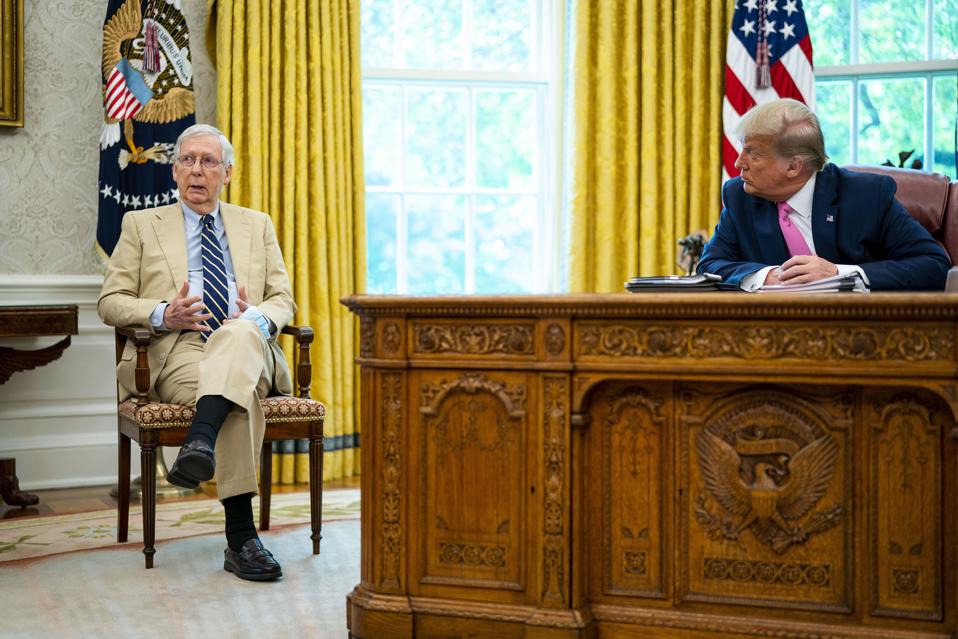 Details of Republican expectations in a second-round stimulus bill has slowly started to leak out, following a meeting between GOP congressional leaders and President Donald Trump at the White House on Monday. While disagreements remain, one thing has become clear from the meeting: a second round of stimulus checks are very likely.

It’s not a surprise that payments directly to taxpayers in the form of checks remain on the table as the Senate deliberates on a second-round stimulus. It’s a feature of the bill that Trump has continued to push for, but one that Senate Majority Leader Mitch McConnell hadn’t fully committed to. That changed on Tuesday, when on the Senate floor, McConnell said Republicans will support a second round of checks, providing his clearest statement on the subject since the first stimulus – the CARES Act – passed in March. It’s an issue Democrats have urged since the May passing of the HEROES Act within the House of Representatives.

The significant momentum in ensuring a second round of stimulus checks is the good news. The bad? The details of just how much people receive, who will be included and when checks will come remain unclear.

McConnell, for instance, has hinted in past weeks that he would prefer to provide stimulus checks for those making less than $40,000 a year. The House, on the other hand, passed the HEROES Act without bipartisan support, which would provide checks to the same group covered in the first round of stimulus – those making $75,000 as a single filer or $150,000 as a married couple would receive the full amount.

How much a person receives also remains in question. Republican leaders haven’t clarified how much they expect to push for, but Trump has called for increases to the check from the first round. Few Republican leaders have signaled support for that stance. Again, in the HEROES Act, it allotted $1,200 per family member. The big change in the House bill would also provide $1,200 per child, up from $600 per child in the CARES Act.

Both sides do hope to finalize a bill by the end of July or early August.

While details will continue to trickle from now until then, there’s not much you can do other than prepare your account for the funds. As the debates continue, here’s how you can ensure you will receive the check as soon as they come available, assuming you qualify for the stimulus.

What You Can Do While You Wait

Take the steps now to make sure your account is set up to accept the stimulus checks, once they’re approved and sent out.

Go to the Get My Payment page on the IRS website. There you can check your payment status, see your payment type and provide bank information to process a direct deposit of the funds.

If you selected to receive your payment via check during the first stimulus round and need the new funds as soon as possible, consider switching so you can have the payment sent directly to your bank.

The IRS will deposit the money into your bank account, allowing for fewer days to lapse before you can spend the funds.

As of now, if you’ve switched banks since the last payment, you won’t be able to set up direct deposit. Instead, the IRS will try and deposit the money. Once the bank rejects the payment, then the IRS will send you a check.

When you go to the IRS website, and fill out the information, finding that your payment status isn’t available, it could be for a few reasons. The IRS could still be processing your 2019 tax return, the tool doesn’t have your information yet or you’re not eligible for the payment.

Some reasons for not being eligible for the first check include you make too much for the eligibility requirements, someone else claims you as a dependent on their tax return or you don’t have a valid Social Security number, among other reasons.

Sort this out as quickly as you can by reaching out to the IRS or connecting with your accountant. It’ll not only speed up getting the first check, but ensure you’re receiving the second payment as soon as you can.

During the first round of stimulus, it took about two weeks before the first set of checks were sent out. This time, you can be among the first to receive them, if you set yourself up while the finer details of the bill come into focus.

Build-To-Rent (BTR): Detached Housing And The Future Of Multifamily
What Are Capital Gains Taxes For The State Of California?
Covid-19 Is Most Certainly A Retirement Story
Leon Cooperman calls Warren’s wealth tax ‘foolish,’ says people would hide money to avoid it
How Bitcoin Fits In A Retirement Portfolio