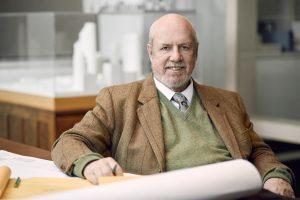 The Perkins clan from the U.S. first made a mark in China in 1917. Dwight H. Perkins was the founder of architecture firm Perkins Fellows & Hamilton in Chicago, and the Midwestern company provided the master plan universities in Nanjing and Shandong.

Dwight’s brother Bradford – better known as Brad — is leaving his own legacy. His architecture firm Perkins Eastman, founded in 1981, has over the years done more than 100 projects in China in 22 provinces. Its client list in the country includes large domestic developers such as Vanke, Greenland and China Overseas, as well as numerous hospitals and schools. The growing China business is part of a global enterprise that spans more than three dozen countries and made New York-headquartered Perkins Eastman one of the world’s largest architecture firms.

China’s architecture business landscape, however, has changed dramatically since Brad first arrived in the country more than two decades ago. “It was the wild west here,” the 77-year-old architect and businessman recalled in an interview in Shanghai. “The work here has actually become more like working in the U.S. or other advanced economies. There is a very large number of very sophisticated clients who have retained international architects and know how to reach contracts,” Perkins said.

At a time of tension in U.S.-China relations, Perkins is unapologetic about his warmth for the land and optimism about the business prospects in the country. Since the 1990s, China has been the world’s largest construction market with an abundance of work for good architects — trends likely to continue owing to its ongoing urbanization, big population, rising income, and evolving need for expertise, he said.

“We used to be accused of using China as our weapons testing ground for designs we could never get built in the U.S., and so a lot of weird stuff has been built here. But there is a degree of design freedom that is very refreshing for many of these architects. In our case, we have certain areas of specific expertise that people want. And because they are hiring us for expertise, they rely on us for much more for help defining the problem and setting up what it is they actually should be doing,” Perkins said.

“People have said, ‘Why are you willing to spend as much time as you do here?’ And I said, ‘Well, one, I love the country. And two, there are opportunities here (that) are unmatched.’”

Perkins Eastman is sometimes confused with Perkins + Will, which was founded by Brad’s father, Lawrence. Young Brad briefly worked at his dad’s firm but left in 1981 to set up his own practice — Perkins Eastman. The business has over the years grown to more than 1,000 staff. Besides architecture design, its services include interior design, urban planning and landscape architecture services.

Brad says he first became interested in China through study of Chinese history. He holds undergraduate degrees from Cornell in Latin American history and architecture, as well as an MBA from Stanford University. His business in China evolved as an outgrowth of the U.S. architecture industry’s expanding interest in international work starting in the 1970s.   That mostly began in the Middle East, in Saudi Arabia, Iran and other oil-rich countries, before growing into Europe in the 1980s. American architects were favored around the world for their expertise in shopping centers, business hotels and high-rises. “We were still a very young firm at that point, and we looked out at to the world as I knew we needed to be involved internationally,” Brad said.

Post-World War II China first started to receive serious global attention starting in the 1990s. His first project in the country was for the Chinese Academy of Sciences in Beijing. Doors to the work were opened in part though friends in Beijing built up by his Sinologist brother at Harvard.

Perkins looked back nostalgically on his early days in the country, when he regularly met clients at the Four Seasons Hotel in Shanghai. He has met clients at the centrally located hotel since it first opened almost two decades ago. The facility will be closed and remodeled this year, leaving him without a familiar hang-out in the city. “My home is closing; I’m going to be devastated,” he chuckled. Perkins Eastman has otherwise had a permanent office in Shanghai since 2000.

One core area of expertise Perkins Eastman possesses around the world is in education. Brad’s father designed more than 1,000 schools, and the son himself is the author of two books about the design of primary and secondary education facilities; one has been translated into Chinese.

When Perkins Eastman first designed schools in China, the focus was on institutions for expat children, such as the Hopkins-Nanjing University Center, run by the Johns Hopkins School of International Studies and the Concordia

International School in Shanghai. These days, he says, Perkins Eastman is increasingly working with local partners to design schools for Chinese children, a trend he expects to continue.

Another area where Perkins Eastman has expertise is elderly care. When Perkins travels the world and engages in dialog about elderly housing, “it always starts out by saying, ‘We don’t need that, because our families take care of their elderly,’” he said. “And I say, ‘Yeah, I hear that every time I enter a country.’” In China, the challenges in elderly care exacerbated by the one-child policy and instances where parents live in China but children and grandchildren may be spread out around the world. “People want to know that family live in a safe environment,” said Perkins, whose published books also include: “Building Type Basics for Senior Living.”

Perkins has started to team up insurance firm Taikang Life Insurance on elderly residential projects in the country. For instance, it designed the Taikang Changping in Beijing that attaches a hospital to living space. The facility is a model for others that Taikang wants to build in Guangzhou, Wuhan and Sanya. The role for the private sector real estate developers in addressing the market for elderly housing will grow in the future as increasingly well-off Chinese put more money to put into retirement homes for parents and themselves, Perkins predicted. “Biological aging affects individuals differently but doesn’t discriminate between Americans and Chinese,” he said.

China’s boom in building has had a big impact on architecture as it’s practiced back in the U.S. – “primarily in speed,” Perkins said. “For a typical project in the U.S., you might spend a year – “years” – defining the problem. Here you’re lucky if you get 60 days. And the overall length of the project of five to seven years is three to four.”

That lesson has been translated back home.   “There’s been an acceleration and decompression” in protect duration that has also been facilitated, too, by the computer, which has really taken over in the past 20 years.   “A lot of visualization techniques allow for customers and designers to see relatively quickly what things are going to look like. You’re expected to show every room with the actual furniture and actual lighting, as well as the view out of the window,” Perkins said. Many designers in the U.S. “use Chinese firms because the rendering shops in New York are very expensive. Here, it’s 1,000 people working 24 hours a day.” In addition, more and more construction materials come from China.

Part of that execution speed in China is the result of the relatively short time in which a project may be fully realized. As an example, Perkins cited one in eastern Shandong Province involving a master plan for a new city center for 100,000 dwellers that filled up in a decade. A similar project in the U.S. would attract only a small fraction of that total in the same period, he said.

Though China’s architectural needs have changed since he first arrived, Perkins sees continuing room for overseas designers to find work. “I used to think that the Chinese wouldn’t need us” at some point because of the large talent pool and experience of local firms in the country’s construction boom.

Yet changing technology in the U.S. and elsewhere has filtered down into changing needs for space and functionality that foreign architects have found a competitive edge in designing even in China. One area, he said, is in hospitals, where operating room are changing to accommodate more imaging and robotic equipment. Many local designers “know the code and standards” and learn formulas but don’t work at the state of the art, Perkins said. “The Chinese clients understand that, and so clients are still demand Western knowledge.”

Yet Perkins, who teaches architecture at alma mater Cornell, at the same time sees many opportunities in America for smart Chinese architects educated there. “The U.S. schools aren’t producing enough architects when the economy is producing a lot of demand, like today,” he said.

He’d like to see the U.S. work harder to solve its “immigration problems” and open its doors wider to the hiring of Chinese architects there. “My best students are from India and China. They’d like to stay, and we’d love to have them stay,” he said.

Mall owner Washington Prime reportedly preparing to file for bankruptcy protection
An activist with value approach takes the next step to turn around a food and beverage manufacturer
Tesla vs. Lucid: Here’s how the EV rivals are and aren’t alike
The $1.9 trillion stimulus bill would make health insurance more affordable for millions
The BEPS Gambit: Is Corporate Tax Harmonization Doomed?