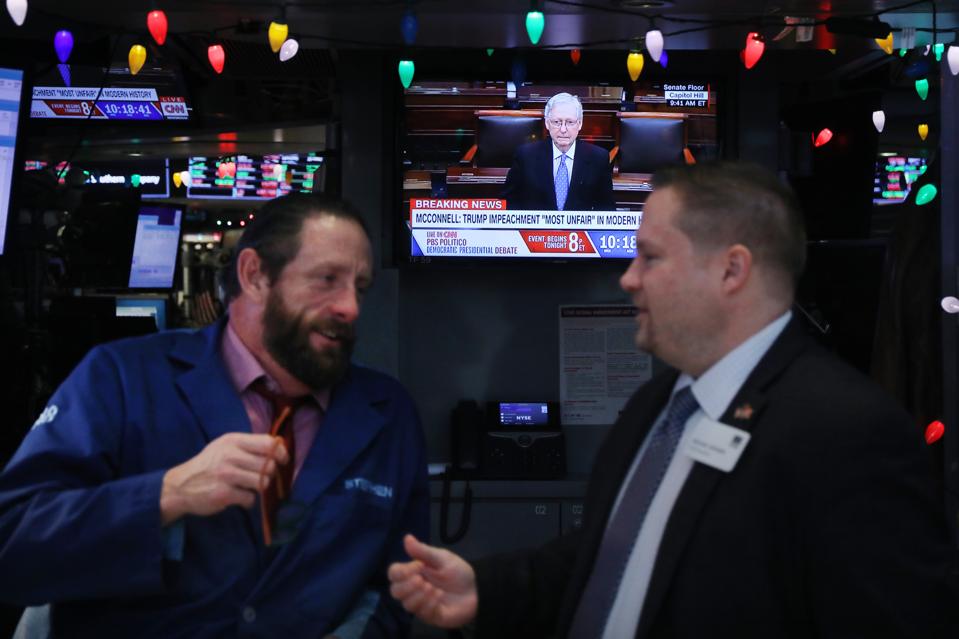 Topline: Though the House of Representatives voted to impeach President Donald Trump on Wednesday night, the stock market rose to new record highs in their first session after the news, boosted by trade progress and a U.S. economy that continues to hold steady.

Crucial quote: “We’ll see short-term market moves on a day-to-day basis, but for now, provided no smoking gun news comes out before the Senate trial, I think the market will react as it has so far,” says Paul Hickey, cofounder at Bespoke Investment Group.

“Markets should not see much of a reaction with the President’s impeachment saga as it is unlikely for the Democrats to get two thirds of the vote in the Senate to convict Trump,” Moya similarly predicts.

Crucial statistic: The S&P 500 gained over 26% during Clinton’s impeachment process, while it fell 13% from the start of Nixon’s impeachment to his eventual resignation.

Key background: The House of Representatives voted in favor of two articles of impeachment against Trump on Wednesday. The first, for abuse of power, alleges that the president pressured Ukraine to investigate his political rival, former vice president and 2020 Democratic candidate Joe Biden. The second article accuses Trump of obstructing Congress by refusing to cooperate with the impeachment inquiry in the first place. After Pelosi announced the impeachment proceedings in September, numerous witnesses gave testimony in both closed-door and public hearings, which concluded in late November. With the House vote in favor of impeachment yesterday, the process moves to the Senate, which is expected to hold a trial in January.